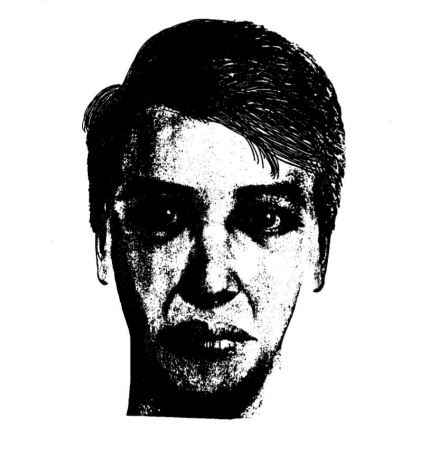 The Riley County Police Department has released a composite sketch of a man possibly connected to one rape case and perhaps more.

On July 27 the Riley County and Lawrence police departments held a joint press conference that announced a partnership in finding a man suspected of 14 different rapes in Manhattan and Lawrence since 2000.

The RCPD re-released the image in a press release sent to KMAN Tuesday.

“We simply don’t know if this person has any connection to the incident in question, and we’d rather not speculate on things,” he said in a statement issued by the department. “What we do know is that this sketch depicts an individual who was seen in the area of the incident shortly before it occurred by a witness who was not directly related to the incident.

“If he can be identified, we want to speak with to determine if he has any information that is relevant to the events of that morning of Oct. 2, 2000.”

Authorities say during the investigation of the very first case at 2214 College Avenue in Manhattan, an individual provided information regarding a white male seen in the vicinity shortly before the incident. This male was described as being between 5-foot-10 to 6-feet tall in height, with a medium athletic build and medium-length sandy blonde hair. It was unknown whether this subject was connected to the incident, but the RCPD wanted to speak with him to determine if he could provide any information relevant to the case. Detectives completed a composite sketch of this male at the time and distributed it in the area of the incident, but no additional leads were generated as a result.

The RCPD and Lawrence PD have decided to release this composite again in the hope that anyone living or visiting in the Manhattan area or attending Kansas State University at the time may recognize the individual. Authorities say it is important to remember that this sketch represents the subject’s appearance in October of 2000, and it’s expected his appearance may have changed over time.

“While this sketch is not new information, we’re hopeful that it will yield new results,” Hegarty said.

Anyone who may recognize this subject is asked to call Manhattan Riley County Crime Stoppers at 785-539-7777 or toll free at 1-800-222-TIPS. SMS Text tips are also accepted by sending a text to “CRIMES” (274637) and starting the body of your message with “TIP353.” Webtips are also accepted by visiting Manhattan Riley County Crime Stoppers online or www.RileyCountyPolice.org.

You do not need to leave your name when providing a tip, collect calls are accepted and you may be eligible for a cash reward.

More information about these cases is also at kansascollegerapist.com.