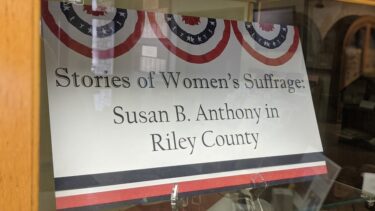 Saturday marked the 200th birthday of women’s rights icon Susan B. Anthony, and the Riley County Museum had something special to commemorate it.

On display at the museum was a letter written by Anthony to Annie Pillsbury Young, along with a photo that was given to Lillian Beck Holton.  Holton’s family owned a newspaper in Holton, KS and she was the grandmother of Ed Seaton.
Anthony visited Manhattan several times advocating for womens’ right to vote in the US.  During those visits, she became acquainted with Young and received a letter from her.  Young gave the letter to the Manhattan Public Library, who then donated it to the Riley County Historical Society.  Anthony also visited Holton in Holton in 1892 where she gave her the photograph.
The display included a transcript of the entire letter since it was written in long hand cursive. The note had Anthony thanking Young for her father giving her a ride to Junction City and asking if she would like a copy of Anthony’s History of Woman Suffrage.