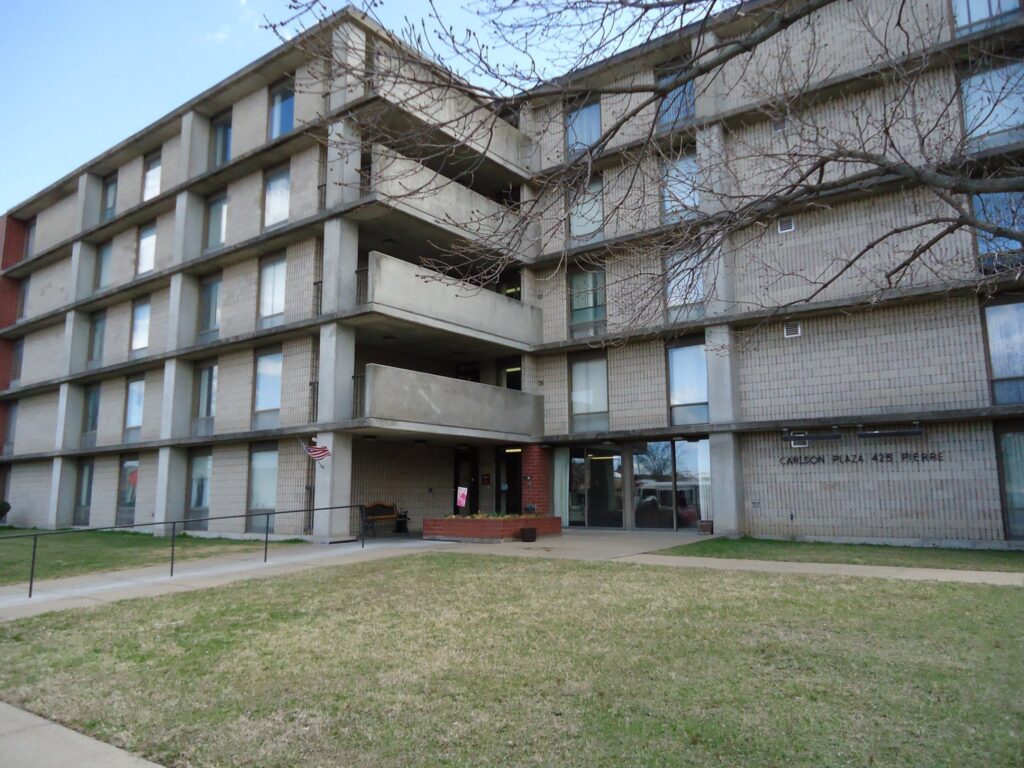 The Manhattan Housing Authority is working with National Church Residences on plans for a demolition and rebuild of a five-story mid-rise public housing building in Downtown Manhattan.

Carlson Plaza, located at 425 Pierre Street, is an MHA property constructed in 1975 containing 47 units — the majority of which are one-bedroom apartments. MHA Executive Director Aaron Estabrook says the 46-year-old building has experienced significant deterioration over its lifespan, and about half of its residents had to be relocated upon the realization of mold and asbestos issues following inspections once COVID-19 restrictions lightened.

“We had the people relocated to other public housing and we assisted them with all of that,” Estabrook told KMAN on Thursday’s edition of In Focus. “The units that are still safe and habitable and not going to hurt anybody at Carlson are still being used.”

Estabrook says the deterioration is the result of long-term federal under-funding of public housing, something he noted is an area the federal infrastructure and Build Back Better bills take aim at improving.

“That is, in part, addressing an $80 billion back-log in pubic housing infrastructure,” Estabrook says. “Carlson is an example of what happens when, over 50 years, the federal government doesn’t fund the necessary levels to do preventative maintenance and keep things updated.”

Inspections were conducted in every unit in the building, and cost of remediation and renovation was determined would exceed the building’s value. This led MHA to explore options with NCR, which owns the nearby Colorado Plaza public housing building, to replace Carlson Plaza with a new building containing 150 units.

“If we’re able to consolidate the subsidies that National Church Residence has and working with them,” Estabrook says, “We would have at least an additional 100 subsidized units.”

Estabrook says the vision  for a campus for subsidized housing downtown is ‘exciting,’ especially in a walkable district located near Blue Earth Plaza where a multitude of community events are held.

He adds that new building would have modernized assets not currently in Carlson, such as a greater number of American Disabilities Act compliant units. A 2019 Facebook post indicates three of the 47 units at the plaza are ADA accessible.

Assistant Executive Director Patrick O’Neil says there are additional concerns outside of the mold and asbestos identified within the units.

“The overall boiler system, heating and air system, all of that is aging and is going to need to be replaced at great expense especially with inflation at what it is now,” O’Neil says. “Those things, I think, will be very beneficial to the residents when it’s redeveloped.”

Other noted concerns with Carlson Plaza include a lack of in-unit thermostat controls. Estabrook added that the old system also does not allow for use of air conditioning once the building switches on the boiler, meaning there’s no way to turn on the A/C during unseasonably warm winter days seen this year. Additionally, the building design was found to trap humidity generated in-unit.

“The building wasn’t designed in a way to get that air flow out, so that moisture turns into mold,” Estabrook says. “And so, even if we did repair and remediate things the actual design of the structure is just going to miss the mark and we’ll have to mold remediation in five more years and it’s just too costly at this point to go down that road.”

Planning for the scope and vision of the project and partnership between the organizations are continuing and no estimate of a total cost was made available to KMAN at this point. Estabrook did note, though, that energy savings amounting to $750,000 resulting from past renovation of MHA’s Apartment Towers are on hand to be applied to the new building should plans become concrete.