Implementation of Manhattan’s new strategic plan was the focus of a day of discussion at the city commission’s annual retreat Friday.

The commission retreat is an annual outing where elected officials and city administrators discuss key goals and organizational focus at the start of the year. This year’s gathering was held in the Sunset Zoo Nature Exploration Center, as has been typical in years past.

The morning started with an update from City Manager Ron Fehr’s office before opening discussion on goals, priorities, and timelines for strategic plan implementation.

“And part of that is talking about creating some kind of multi-year plans, financing even from a budgeting standpoint,” says Fehr.

“Part of my message to the commissioners today was just that we’re short staffed hiring, and everybody’s having those problems and we have them too,” he says. “And so part of our challenge is just maintaining our operations and maintenance for expected levels, so being able to absorb additional projects is something we need to be careful about and make sure that we’ve got the capacity to see them through.”

The City of Manhattan began work on its five-year strategic plan in January 2021 under the moniker ‘CrossroadsMHK,’ which was formally adopted that November. The plan sought public engagement in numerous rounds, advertised as an effort to prioritize city services, programs, investments and projects.

The plan [see a brief overview here] lists a set of organizational values for the city as well as mission and vision statements. It also lists five goals, the first of which is a well-run city organization. 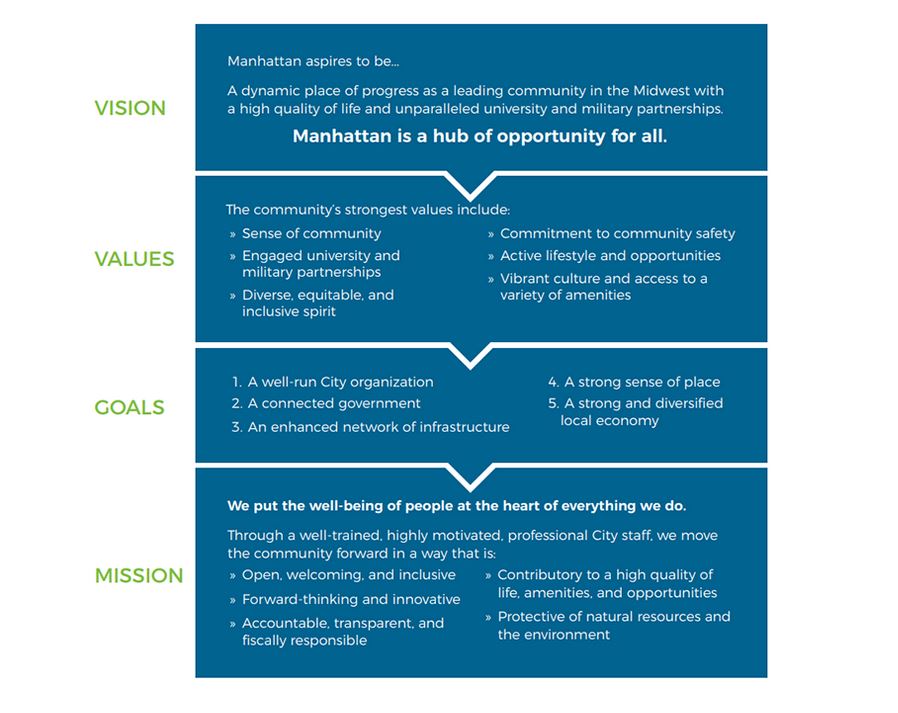 Goals denoted in the strategic plan include various recommendations, some more broad such as ‘attract new private businesses to the community’ or ‘continue fostering growth of Aggieville and Downtown districts.’ Other recommendations are more specific in focus, such as the recommendations to ‘fund the City’s Bicycle and Pedestrian Systems Plan’, ‘develop a spending plan for American Rescue Plan Act (ARPA) funds’, or to ‘implement recommendations of a total rewards study for the City organization.’

Conversations regarding difficulties attracting and retaining employees of the city continued from Tuesday’s city commission work session where department heads were near unanimous in highlighting staff difficulties — both as a result of and being exacerbated by the COVID-19 pandemic.

“We recruited 72 new employees last year, but we lost 69 — that’s not much of a gain,” Fehr says. “We’re behind and we need to make sure we take care of our people. That’s important for us to do because most of our services rely on people to be able to do them.”

Though halted a year amid the pandemic, the City of Manhattan has regularly provided step raises and cost of living adjustments to city employees. Even so, the city hasn’t completed a pay study since 2014 and over time Manhattan’s pay and benefit slipped out of a competitive range for many.

“The commission did approve a 4 percent increase, so a 2 percent COLA, everybody got that at the beginning of the year,” says Fehr. “It just varies by year-to-year, and sometimes the governing body looks at what other governing bodies are doing associated with that. And some of them are more transparent about that total package as opposed to others.”

Commissioner Wynn Butler Friday reiterated critiques of the strategic plan, saying he was hoping for more financial specifics in the final report.

“The number one thing has got to be we’ve got to make those hard budget decisions that Jason [Hilgers]’s been talking about,” says Butler. “And I just don’t see an effort on that.”

Conversation on outsourcing city services sparked multiple commissioner comments. Butler noted the city already contracts for certain services such as mowing, and expressed support for looking at other government functions for possible contracting.

“I mean, you’ve got sounds like about a 75 percent turnover based on what you briefed Tuesday, and that’s very costly to retrain,” says Butler. “If you could just outsources certain things, […] it may be a real benefit because you’re not paying into social security, you’re not paying the KPERS contribution, you’re not paying […] for the medical and things like that.”

Commissioner John Matta called this a ‘big opportunity’ to look into such a possibility, especially given the under-staffing situation being faced across the organization.

“Look at areas where you might have big systems costs or something or you have archaic things,” says Matta. “Part of that outsourcing is gong to someplace that has very good technology, that has a better way to do it.”

Deputy City Manager Jason Hilgers says the city’s been forced into that to a degree already amid the shortages they’ve faced.

“Even on the utility side where it’s not being pressured by property taxes, it’s not being pinched by budget constraints, they’re having a hard time just filling a position,” he says. “They have to back themselves up with the private sector because when those after-hour call come, when those emergency breaks happen, we don’t have enough people to respond.”

The ‘X-factor’ for Hilgers, though, was what will happen if they lean into privatizing city services and costs of services go up.

“They may be able to cut us a deal today that we can all say makes sense financially, but as their resources get cramped, as they get pressure from the marketplace, we know their rates — they’re not coming down.”

Fehr noted that for some services, such as landscaping or mowing, there is a robust number of companies in the market making for a better case to contract out the work. Butler was agreeable, saying they can’t ‘blanket’ outsource city services.

Among discussions were housing elements of the strategic plan, reflected in the recommendations of Goal 4 of the plan. The city is gearing up for a housing study, the first since 2000, and Fehr is hopeful the results of a statewide housing study will lead to more user-friendly finance tools to aid in neighborhood revitalization.

“I don’t want to just like give people money, […] not a big ‘take from the rich and give to the poor’ so they can have a house,” says Commissioner Mark Hatesohl. “We’ve got to do something that’s less socialistic, so to speak.”

Butler raised the importance of a focus on workforce housing, an advertised element of Manhattan’s economic development sales tax voters approved to go into effect in 2023, which aims to improve housing opportunities for households collecting 80 percent of the median income. He proposed a differentiation between groups or committees working on workforce housing initiatives and those addressing low-income housing initiatives.

“I hope the housing study shows some of the holes,” she says. “And then again, look at what the state plan is and take their ideas and mesh the two ideas together.”

Commissioners also discussed the city’s debt and a plan to manage it, with Fehr saying the city’s docket of major projects has led the organization to approach the limit of their authority to issue debt without devoted revenue streams. A work session is planned in February for more focused discussion on the topic.

“It doesn’t mean we’re not going to […] stop issuing all debt,” he says. “But we have to be careful about what we do issue.”