Manhattan has no plans to further explore annexing the Green Valley area for the time being.

A majority of city commissioners Tuesday voiced opposition to pursuing a contract for an extension of services study that would be required of Manhattan as a next step before considering a unilateral annexation of the community. That study would have more specifically analyzed the necessary infrastructure and service expansions required to serve the city if expanded eastward further into Pottawatomie County.

“I’m just not seeing the justification just to do it to do it right at this point in time,” says Commissioner John Matta.

Commissioners reviewed the findings of a fiscal impact analysis of a potential annexation, conducted by TischlerBise, Inc. for a fee of nearly $99,000. The study was approved by the Manhattan City Commission in 2019 following a Pottawatomie County governance study identifying annexation into the city as one possible option to address the needs of the growing community in Blue Township.

“As based on current level of service, based on the assumptions on those services and capital needs and the revenues that we’ve projected, there’s a net fiscal positive,” says TischlerBise Vice President Julie Herlands.

Herlands says the study modeled the direct potential revenues and costs to the city over a 20 year period based on current growth trends as well as in two scenarios of even greater growth in the area. Though not including utilities considerations or unknown variables regarding inflation and property value increase, TischlerBise estimated a net positive between $5 million and $18 million over 20 years coming to the City of Manhattan if the entire area of study were to be annexed. 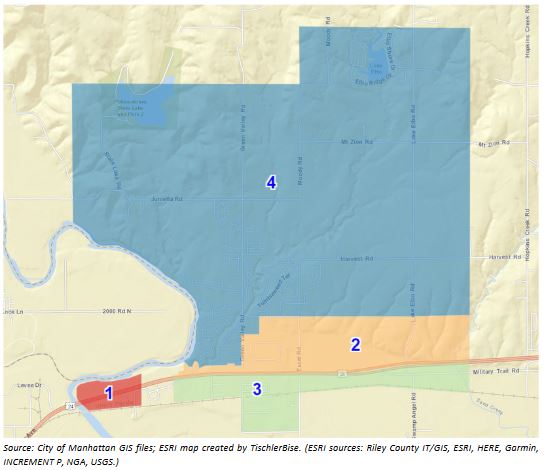 The costs and benefits were further broken down into four ‘fiscal analysis zones’ or FAZ in Green Valley. FAZ 1, 2 and 3 are more commercially populated zones, tending to follow US 24. FAZ 4 is the largest, northernmost portion of the area of study. Of the four zones, the largely residential FAZ 4 is the only found to be a hypothetical net negative cost to the city if annexed. Projections indicated removing FAZ 4 while annexing the other three zones would result in net positive revenues between $19 million and $23.5 million to the City of Manhattan.

“This is a fiscal impact study — we have not considered other elements, other factors, other criteria,” says Herlands. “Social, environmental, etc. This is purely a fiscal impact analysis, [comprehensive]plans and other planning efforts will broaden that and provide a holistic approach.”

Herlands and City Manager Ron Fehr also noted the figures quoted do not take into account possible funding tools and mechanisms at the city’s disposal that have the possibility of lessening the costs cited in the study. Commissioner Wynn Butler, though, felt the mill levy impact on residents of the area needed emphasis.

“This is all great, the city annexes it and we make more revenue but what it doesn’t tell you is that everybody out there gets 50 mills added to their property tax bill,” says Butler. “Why did this area grow? Because they didn’t get hit with 50 mills and all the regulations.

Following commissioner questions regarding the possible extent of infrastructure upgrades and services such as fire protection that would be required of the city if annexation were pursued, numerous residents of the township expressed their opposition to the idea during the public comment period.

Blue Township Trustee Dan Dekat says the lower taxes and cost of housing were an impetus for his moving there 37 years ago, and asked commissioners to consider more than money in their decision to move forward.

“I love the place where I am and that’s where I want to be ’till the day I die,” says Dekat. “I hope you’ll consider that, because there are people if you go 50 mills they’re not going to be there.”

Robert Busby echoed similar sentiments, saying residents also hold concern about the cost of special assessments pricing them out in the event of annexation as well.

“We have an ability to grow together, but there must be some real conversation about ways to mediate and achieve things without duplicating and adding costs.”

Following public comment, commissioners expressed general opposition to continuing to the second phase of study for any of the four zones identified. Commissioner Mark Hatesohl said the city should rest for the time being, though expressed difficulty balancing the capital and operational costs of extending fire department service east with a need for additional commercial land in the city limits.

“If the demand is great, if the opportunity is great, then I think we could make an argument for some of [FAZ] 2,” says Hatesohl. “Simply because that is our only opportunity really in the near future to do anything with commercial, industrial type land.

“That is just a long ways out there, but if that’s the only option we might have at some point we’re probably going to have to do something.”

Mayor Linda Morse was the sole explicit supporter of pursuing an extension of services study and taking the next step toward annexation. She says the additional fiscal study will give current and commissioners down the line foundational data to work with in the future.

“We are blocked on so many sides by the high hills, by Fort Riley,” says Morse. “I don’t want the east side of Manhattan to be blocked and if we don’t think in a forward fashion, that’s entirely what could happen.”

Despite her urging, commissioners remained opposed to further pursuit of study into annexation. Commissioner Usha Reddi says Manhattan needs to focus on getting current projects and initiatives completed before moving onto another.

“Sometimes we put in so much investment thinking there’s a return on investment and sometimes it’s less than what we anticipated or not enough to meet the needs of a growing community,” Reddi says. “If there is another business that wants to come here and have a preference for an island annexation as Heritage Plaza did, I would like to keep those options and maybe have this later discussion at a later date.”