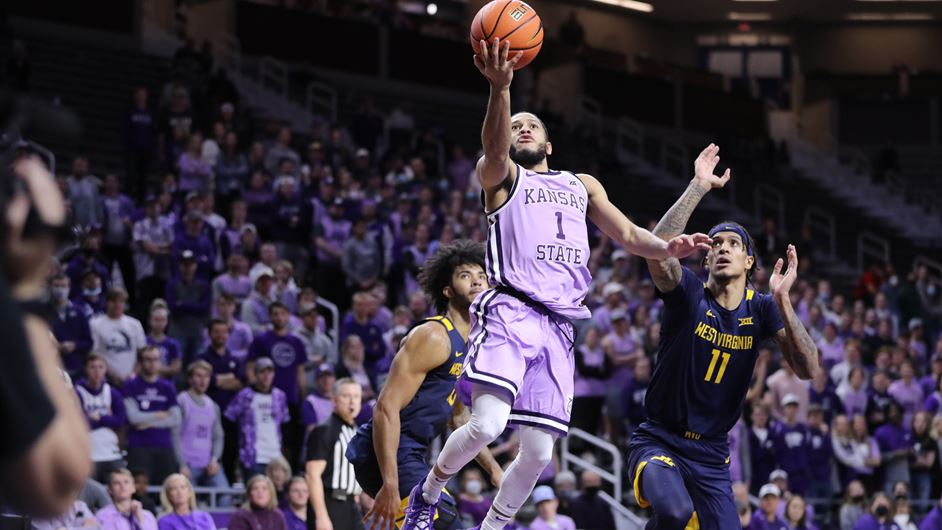 MANHATTAN, Kan. (Kansas State Athletics) – Kansas State rallied from a double-digit second-half deficit for the second consecutive game, as the Wildcats scored 11 straight points during a larger 18-2 run to flip the momentum en route to a 78-73 win over West Virginia on Monday night before a crowd of 5,401 fans at Bramlage Coliseum.

Nowell was joined in double figures by fifth-year senior Mark Smith, who collected his Big 12-leading seventh double-double of the season with 17 points and 10 rebounds, and sophomores Ish Massoud and Nijel Pack, who each finished with 13 points. Pack, who scored his fewest points in 6 games but still managed double figures for the 16th consecutive game, still impacted the game in other ways with a game-high 5 assists and 6 rebounds.

K-State, which won for the fourth time in 5 games in the month of February, earned its second victory in 3 days when trailing by double figures in the second half, as West Virginia (14-11, 3-9 Big 12) led 54-44 with 16:12 to play after a 3-pointer by redshirt freshman Isaiah Cottrell.

Massoud started the string of 11 consecutive points with a layup at the 15:51 mark that was followed by a pair of free throws by Smith, a layup by Pack and two more throws from Smith before a 1-of-2 effort from the line from sophomore Selton Miguel gave the Wildcats their first lead at 55-54 with 11:26 remaining.

Senior Taz Sherman, who finished with a game-high 23 points, briefly gave the Mountaineers the lead again at 56-55 after a pair of free throws at the 11:13 mark, but the Wildcats responded with 7 straight to cap the 18-2 run and force head coach Bob Huggins to call a timeout with 7:55 to play. Nowell had 5 of the 7 points in the stretch, including a 3-pointer after the defense had just forced a shot clock violation.

The lead twice grew to as many as 9 points, including 71-62 after a Massoud free throw at the 4:35 mark, but WVU used an 11-3 run to close the deficit to 74-73 on a Sherman jumper with 2:28 remaining. However, on the next possession, Massoud drew a foul on a 3-point attempt and calmly knocked down all 3 free throws to push the lead back out to 77-73 with 2:02 to play. Massoud, who saw his streak of consecutive free throws to start the season end at 23, finished the night by making a season-high 8 of 10 attempts from the line.

The Mountaineers would not score the rest of the way, as Nowell finished off the scoring by making 1-of-2 free throws with 1:02 remaining.

In a physical game in which 44 personal fouls were called, the Wildcats took advantage of their opportunities from the free throw line, converting on 31-of-39 attempts, including 12-of-13 in the first half. The 31 free throws were the most in game in more than 6 seasons since making 36 against South Dakota on November 10, 2015, while the 39 attempts were the most since posting 40 at West Virginia on February 11, 2017.

Sherman was joined in double figures by fellow senior Kedrian Johnson (15) and Cottrell (13).

The win snapped a 4-game losing streak to West Virginia, as K-State improved to 6-4 at home in the series.

Martinez runs his way to silencing doubters in upset win vs. No. 6 Oklahoma