MANHATTAN, Kan. (Kansas State Athletics) – Five current or former Kansas State Wildcat track and field athletes will compete in the 2022 Commonwealth Games, which began on Thursday (July 28) and will run through Monday, August 8 at Alexander Stadium in Birmingham, England. 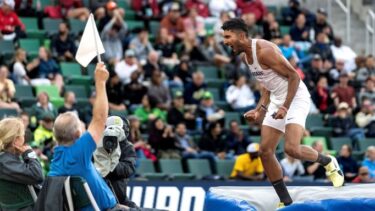 The list of Wildcat athletes at the Games include former NCAA Champions Tejaswin Shankar (India) and Kimberly Williamson (Jamaica), who will be competing in the men’s and women’s high jump, current student-athletes Kyle Gale (Barbados) and Shalysa Wray (Cayman Islands), who will be running in the 400 meters, and recent graduate Wurie Njadoe (The Gambia), who will be contending in the women’s 100 and 200 meters. In addition, Gale will run in the men’s 4×400-meter relay for Barbados.

The Games are an international multi-sport event which covers 72 nations currently or formerly part of the English Commonwealth and includes Australia, Canada, India and many countries in Africa, Asia and the Caribbean.

Shankar concluded his K-State career by earning his second outdoor national title (2018, 2022) in the high jump by winning a sudden death jump off with Georgia’s Darius Carbin at the NCAA Championships on June 11. Shankar cleared a height of 2.27m/7-5.25 after fouling three times at 2.24m/7-4.25, while Carbin missed at both heights. He was an eight-time All-American in the high jump, including a four-time First Team Outdoor All-American.

Njadoe, who dealt with injuries throughout her K-State career, capped her time at K-State by advancing to the NCAA Championships in both the 200 meters and 4×400-meter relay. She posted a time of 23.45 in the 200 to finish 21st overall, while she was part of the relay team that finished 22nd with a time of 3:37.70. She also placed in the top-10 in four events (200 meters, 4×100-meter and 4×400-meter relay teams and long jump) at the Big 12 Championships, including top-5 finishes by the relay squads.

Wray won national titles in the women’s 200 and 400 meters in her home country of the Cayman Islands in late June. The 2020 Tokyo Olympic Games participant won the 400 meters by more than 7 seconds over second-place finisher Jaden Francis with a time of 53.23. She also advanced to the NCAA Championships in the 400 meters, finishing with a time of 52.94 to finish 23rd in the semifinals.

Williamson, who competed for the Wildcats from 2014-16, will compete in the women’s high jump on Thursday (August 4). She recently made it to the finals of the women’s high jump at the World Athletics Championships, finishing 11th with a height of 1.89m/6-2.25. The Jamaican National Champion won the 2016 NCAA Outdoor Championship and became a four-time All-American in the high jump during her time at K-State.

For more information on the Commonwealth Games can be found here.