MANHATTAN, Kansas (Kansas State Athletics) – K-State women’s basketball standout Ayoka Lee has been nominated for the 2022 NCAA Woman of the Year. Lee was selected by the Big 12 Senior Women’s Administrators for consideration for the honor and is among 53 nominees from conference offices at the Division I level. 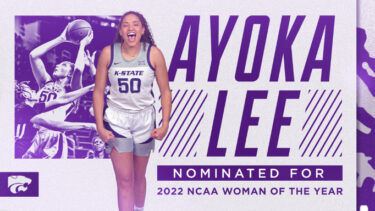 The Woman of the Year Selection Committee, made up of representatives from the NCAA membership, will choose 10 nominees from each division to make up the national Top 30 honorees. The Top 30 honorees will be announced in October. From there, the selection committee will narrow the pool to three finalists from each division. The NCAA Committee on Women’s Athletics will select the 2022 Woman of the Year from the nine finalists.

At January’s NCAA Convention in San Antonio, the national Top 30 honorees will be celebrated, and the NCAA Woman of the Year will be announced.

The NCAA Woman of the Year program is rooted in Title IX and has recognized graduating female college athletes for excellence in academics, athletics, community service and leadership since its inception in 1991. For more information about the program and previous winners, please visit ncaa.org/woty.

Lee graduated in May of 2021 with her undergraduate degree in psychology and is currently pursuing her graduate degree in couples and family therapy. Lee is the second player in K-State women’s basketball history to be named to the CoSIDA Academic All-America First Team, joining Laurie Koehn in 2004. Lee and Koehn are the only two-time recipients of CoSIDA Academic All-America honors in the history of the program.

On the court, Lee was a First Team All-American by The Athletic and Sports Illustrated, a Second Team All-American by the Associated Press and USBWA, a Women’s Basketball Coaches Association All-America Honorable Mention recipient, a finalist for the 2022 Lisa Leslie Award, a unanimous All-Big 12 First Team selection by the league’s coaches and garnered her first selection to the Big 12 All-Defensive Team.

Lee was the first player in K-State women’s basketball history to average a double-double in at least two seasons, as she achieved the feat in her freshman season in 2019-20 and again in 2021-22.

As part of her 2021-22 statistical resume, Lee set the NCAA Division I single-game record of 61 points scored against Oklahoma on January 23. She also led the Big 12 for field goal percentage and a Big 12-high eight games with 30 or more points.

In her career, Lee ranks ninth in school history for points scored with 1,661, sixth for rebounds with 887, third for blocks with 235, sixth for field goals made with 665 and sixth for free throws made with 331. She is also second for double-doubles with 49.