MANHATTAN, Kansas (Kansas State Athletics) – Lauded for his skill set as both a wide receiver and kick returner, Kansas State senior Malik Knowles was one of 52 players in the nation to be named to the watch list for the 2022 Paul Hornung Award, the Louisville Sports Commission announced Thursday. 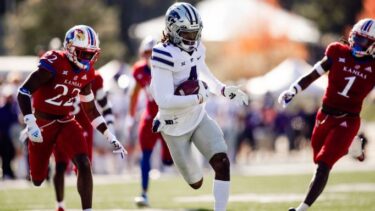 Knowles’ mention for the Hornung Award, which is given annually to the most versatile player in major college football, marks the seventh time a Wildcat has been up for the award since its inception in 2010. Last season, fellow receiver and punt-return specialist Phillip Brooks was on the list. Prior to him, current Chicago Bear Byron Pringle (2017), current Seattle Seahawk Tyler Lockett (2013 and 2014), Tramaine Thompson (2013) and Daniel Thomas (2010) were candidates for the award.

A Second Team All-American kick returner in 2021 and a Preseason All-American this year, Knowles finished second nationally with two kickoff-return touchdowns, while his 33.1-yard average ranked fourth in the country. He was a First Team All-Big 12 kick returner by the league’s coaches, marking the 15th time in the 26-year existence of the Big 12 – and the eighth time in the last nine years – that a Wildcat was a First Team All-Big 12 returner.

As a receiver, Knowles hauled in 29 receptions for 441 yards and four touchdowns in 2021 as he earned Honorable Mention All-Big 12 accolades. He capped the season with two receiving touchdowns in K-State’s win over LSU in the Texas Bowl, which tied for the third most in K-State bowl history. Additionally, Knowles totaled a career-high 112 receiving yards against Southern Illinois, while he hauled in three passes for 94 yards at Kansas, which included a season-long touchdown catch of 68 yards.

Entering the season ranked eighth in school history in career touchdown reception (12), Knowles is one of just two players in school history with touchdowns of at least 70 yards on a run (2020 at Baylor – 75 yards), catch (2020 at Texas – 70 yards) and kickoff return (three times) in a career, joining Brandon Banks (2008-09).

Fans can purchase ticket to any of the seven home games online at www.kstatesports.com/tickets or by phone at 1-800-221-CATS.