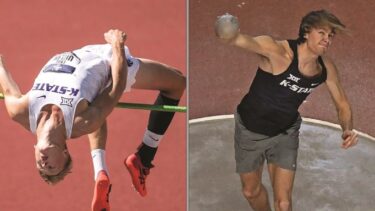 The decathlon consists of 10 events over two days, including the 100 meters, long jump, shot put, high jump and 400 meters on day one and the 110-meter hurdles, discus, pole vault, javelin and 1,500 meters on day two.

Uhlin, who won the high jump and 1,500 meters event of the competition, finished second with a personal-best tally of 7,618 points, while af Forselles totaled 7,028 points to place third in his first decathlon competition of the season. Six-time Swedish national champion Fredrik Samuelsson, who won the 100 meters, 400 meters and javelin events, won the decathlon with 7,713 points.

Uhlin eclipsed his previous best mark of 7,587 points, which he set in finishing fourth at the Big 12 Outdoor Championships on May 14. The Swedish national capped off his impressive freshman season in 2021-22 by placing 12th in the decathlon at the NCAA Championship to earn Second Team All-America honors. It was the highest finish by a Wildcat in the event since Reinis Kregers placed in the top-10 in 2014.

af Forselles, who did not compete for the Wildcats during the outdoor season, joined Samuelsson and Uhlin as the only competitors to eclipse the 7,000-point plateau in the event. He finished second in the competition in the long jump, high jump and pole vault, while he was second in his heat in the 100 meters. He had a personal-best time of 15.26 in the 110-meter hurdles to place third, while he had a season-best height of 4.82m/15-9.75 in the pole vault. He joined Uhlin as the only entries to hit above 2 meters in the high jump with a mark of 2.02m/6-7.50.

af Forselles did compete for the Wildcats during the indoor portion of the 2021-22 season, highlighted by a fourth-place finish in the heptathlon at the Big 12 Indoor Championships with 5,586 points.