MANHATTAN, Kansas (Kansas State Athletics) – For the first time in his career, Kansas State senior Ty Zentner is a candidate for the top punting honor in the country, as the August Sports Council unveiled the preseason watch list for the 2022 Ray Guy Award on Wednesday. 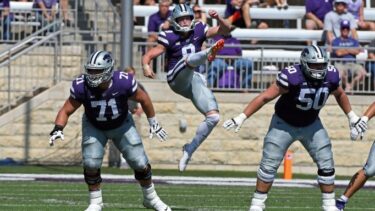 It is the first time a Wildcat is up for the award that honors the college punter of the year since Devin Anctil was a preseason candidate in 2019. Prior to Anctil, Nick Walsh was on the watch list in both 2015 and 2016. Tim Reyer, a two-time candidate, was a semifinalist for the award in 2007.

An Honorable Mention All-Big 12 pick last year, Zentner finished the 2021 season with a 43.7-yard average to tie for fifth in school history, and his average would have ranked second in the Big 12 had he punted eight more times to reach the required minimum. His strong average was buoyed by 16 punts that traveled 50 or more yards, while he only had four touchbacks.

Zentner, a product of Topeka, Kansas, posted a career-high five 50-plus yard punts at Oklahoma State in addition to setting a career single-game best average of 55.7 yards per punt at Texas Tech, which was the 12th-best average in the nation and fourth in the Big 12 during a single game in 2021. One of his punts against the Red Raiders was a 63-yarder – the second-longest of his career – which immediately preceded a K-State safety that swung the game in the Wildcats’ favor.

Zentner’s inclusion on the Ray Guy Award watch list marks the sixth time in the last two weeks a Wildcat has been named a preseason candidate for a major college football award. Running back Deuce Vaughn is up for both the Maxwell and Doak Walker awards, cornerback Julius Brents is a candidate for the Jim Thorpe Award, defensive end Felix Anudike-Uzomah is a candidate for the Bronko Nagurski Trophy, and offensive lineman Cooper Beebe is on the Outland Trophy watch list.

Fans can purchase tickets for all home games online at www.kstatesports.com/tickets or by phone at 1-800-221-CATS.