MANHATTAN, Kansas (Kansas State Athletics) – For the fourth time in the seven-year history of the program, K-State soccer garnered the United Soccer Coaches Team Academic Award for its performance in the classroom during the 2021-22 academic year. 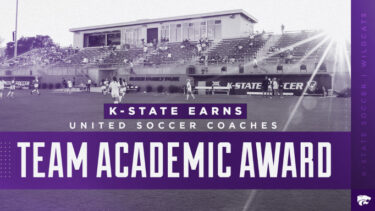 United Soccer Coaches annually celebrates the academic achievements of high school and college soccer teams whose student-athletes collectively demonstrate a commitment to excellence in their studies over the course of a full academic year.

College Team Academic Award recipients are active members of the United Soccer Coaches College Services Program with a composite grade point average of 3.0 or better on a 4.0 scale for all players on the roster.

K-State begins its seventh season of action on Thursday, August 18, as the Wildcats host Northwestern. Match time is set for 7 p.m. For tickets, contact the K-State Athletic Ticket Office at (800) 221-CATS or
visit kstatesports.com/tickets.