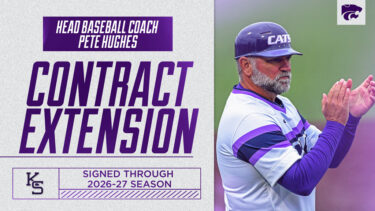 MANHATTAN, Kan. (Kansas State Athletics) – K-State Athletics and head baseball coach Pete Hughes have agreed to a contract extension through the 2026-27 season, director of athletics Gene Taylor announced Thursday. The extension was unanimously approved by the K-State Athletics, Inc., Board of Directors.

“Coach Hughes is a proven leader of men who has established a great culture inside our baseball program,” Taylor said. “We continue to make progress under his leadership, not only at recruiting and developing baseball players, but also great students and community leaders.”

In four seasons under Hughes, K-State is 98-92 (.516) with three straight seasons at .500 or better. The Wildcats have accumulated 63 wins over the last two seasons and reached the semifinal round of the Big 12 Championship in back-to-back seasons.

“What an honor it is to have the support and confidence of President Linton and Gene Taylor,” said Hughes. “I am fortunate to have a program comprised of talented, motivated and loyal staff and players. These are the people responsible for this opportunity – the opportunity to continue to grow K-State baseball to the highest level. My wife Deb and I have never once underappreciated the privilege of being part of and working for this university, athletic department and phenomenal community.”

Hughes has sent 14 players to the professional ranks since taking over the helm ahead of the 2019 season, including the program’s highest-ever draft pick in 2021 first-rounder Jordan Wicks. The last two MLB Drafts have seen seven Wildcats selected, with five more signing undrafted professional contracts.

Hughes’ teams have made an immediate impact within the community, spearheaded by his 19 Ways community service initiative. The Wildcats are four-time defending national fundraising champions for College Baseball Vs. Cancer – the signature fundraising campaign of the Pediatric Brain Tumor Foundation. Hughes and his teams have combined to raise over $130,000 over four fundraising campaigns.

Over 25 years as a head coach, Hughes has a career record of 750-584-3 with three NCAA Tournament appearances. He has seen 82 MLB Draft picks, including 20 in the first 10 rounds, 86 all-conference selections, 22 all-district honorees and seven all-Americans.