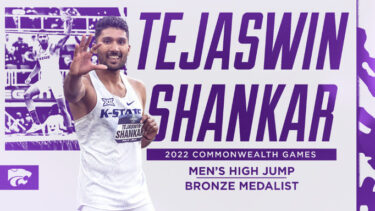 The two-time NCAA champion, Shankar nabbed his first medal at an international competition with a height of 2.22m/7-3.25 on his first attempt to win India’s first track and field medal at the Commonwealth Games. It marked his second-highest mark of the outdoor season for Shankar, who won the NCAA Championship in a sudden death jump off with a season-best height of 2.27m/7-5.25 on June 11. He has now posted a mark of 2.22 or higher in three of his five high jump competitions this outdoor season.

Shankar cleared heights of 2.10m, 2.15m, 2.19m and 2.22m before missing at 2.25m and 2.28m. He finished behind gold medalist Hamish Kerr of New Zealand and silver medalist Brandon Starc of Australia, who both cleared heights of 2.25m/7-4.50 on their first attempts. Kerr won the gold medal after clearing 2.22m on his first attempt, while Starc hit the mark on his second attempt to claim the silver.

Shankar won the bronze medal over two others (Bahamas’ Donald Thomas and England’s Joel Clarke-Khan) who also posted heights of 2.22m. However, Shankar cleared the mark of his first attempt, while Thomas and Clarke-Khan did it on their second and third attempts, respectively.

Shankar concluded his K-State career by earning his second outdoor national title (2018, 2022) in the high jump by winning the sudden death jump off with Georgia’s Darius Carbin at the NCAA Championships. Shankar cleared a height of 2.27m/7-5.25 after fouling three times at 2.24m/7-4.25, while Carbin missed at both heights. He was an eight-time All-American in the high jump, including a four-time First Team Outdoor All-American in the event.

Two other Wildcats competed on Wednesday (August 3), as current student-athletes Kyle Gale (Barbados) and Shalysa Wray (Cayman Islands) competed in the men’s and women’s 400 meters. Gale qualified for the semifinals of the men’s 400 meters with a time of 46.66 to finish in fourth place in Heat 3 of Round 1. He will race in the first semifinals on Friday (August 5). Wray did not qualify for the semifinals in the women’s 400 meters, as she posted a time of 53.92 to finish in sixth place in Heat 3 of Round 1.

Two more Wildcats – Wurrie Njadoe (The Gambia) and Kimberly Williamson (Jamaica) — will compete in the women’s 200 meters and women’s high jump, respectively, on Thursday (August 4), while Gale will run in the men’s 4×400-meter relay.

The Games are an international multi-sport event which covers 72 nations currently or formerly part of the English Commonwealth and includes Australia, Canada, India and many countries in Africa, Asia and the Caribbean.

For more information on the Commonwealth Games can be found here.