Martinez ran for 57 and 18 yards for K-State’s first score just 40 seconds into the game and added a 69 yard trot when the Cats needed a statement drive in the 4th quarter, a run that put K-State back on top.

His 12 yard option keeper with 5:54 to play put K-State on top 37-20, letting fans catch their breath again after anxious moments through the third quarter.

Vaughn’s own 69 yarder set up a third quarter field goal from Chris Tennant as K-State never trailed after jumping out to a 13-0 lead in the first quarter.

Combined, the two ran for 341 yards as Kansas State won its seventh straight over the Red Raiders in the series and moved to 2-0 in the Big 12, 4-1 overall. Tech fell to 3-2 overall, 1-1 in the conference.

This is the first time in K-State history that two players have rushed for 100 yards in back to back games. Adrian Martinez and Deuce Vaughn are tough to beat.

Vaughn would finish with a career high 170 yards on 23 carries and Martinez had 171 on 13 carries, while scoring 3 touchdowns.

Texas Tech only topped 100 yards of offense late in the second quarter, when they put together scoring drives to close to within three of the Cats at halftime, 13-10.

The Wildcats limited Tech to six of 17 on third and fourth downs on the day. Six sacks from Felix Anudike-Uzomah and Khalid Duke on the afternoon severely limited quarterback Donovan Smith’s ability to get the offense moving quickly.

K-State intercepted Smith twice and took away two fumbles, finishing off Tech’s attempt at a late comeback with Julius Brent’s diving interception just outside the red zone with 2:01 to play. 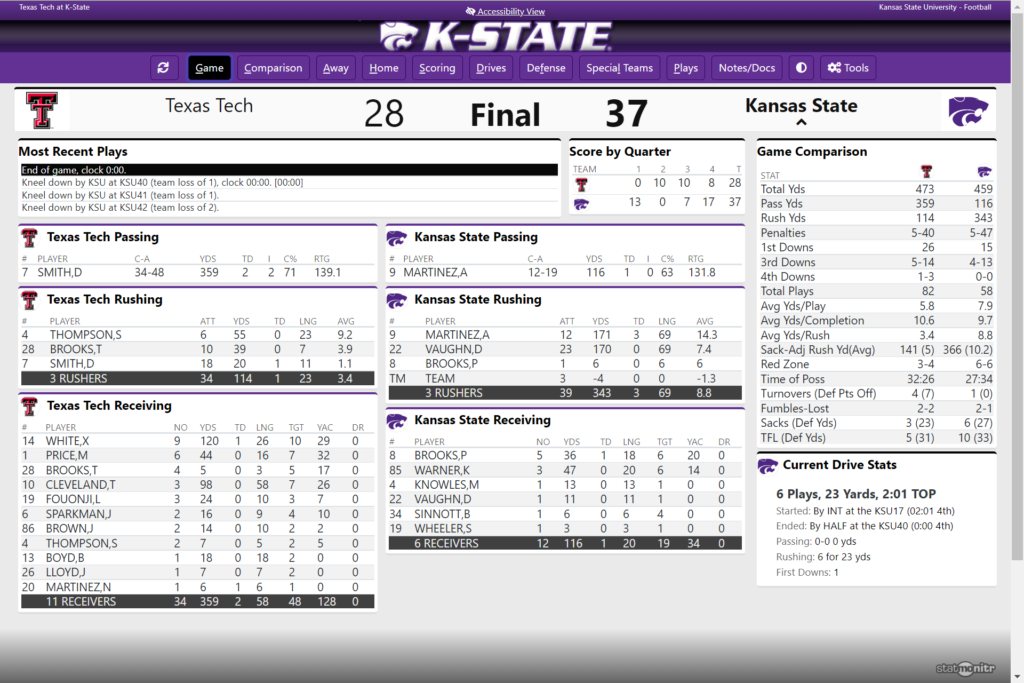