Kansas State took advantage of two Kansas mistakes in the first quarter, scoring 23 points and building a lead it would never give up on the way to a victory.

The win is the 14th straight against the Jayhawks and clinched a spot for the Wildcats in next Saturday morning’s Big 12 Championship game.

Following a three-and-out, a Ty Zentner punt was muffed by O.J. Burroughs. K-State recovered and scored moments later on a jet sweep handoff to Malik Knowles.

Kansas would answer with a nine play, 75 yard drive that would end with Torry Locklin 12 yard run.

It would be the only time the game would be tied.

A 42 yard sling from Will Howard to a wide open Sammy Wheeler down the opposite hash mark became the go-ahead score with 5:06 to play in the quarter.

The following KU drive ended with a holding penalty in the endzone, giving K-State two on the safety followed by another TD drive. Knowles would get his second touchdown run of the night from four yards out to push the lead to 23-7 with 1:37 to play in the first.

From there, the teams would trade scores until the Cats put back-to-back possessions in the 4th with a field goal from Zentner and a D.J. Giddens five yard run, sending fans towards the parking lots as the lead reached 47-27.

K-State earns a rematch with TCU for the Big 12 title in Arlington next Saturday morning. Kick off will be just after 11a.m, with Powercat Gameday beginning coverage on Newsradio KMAN and 101.5 KROCK at seven. 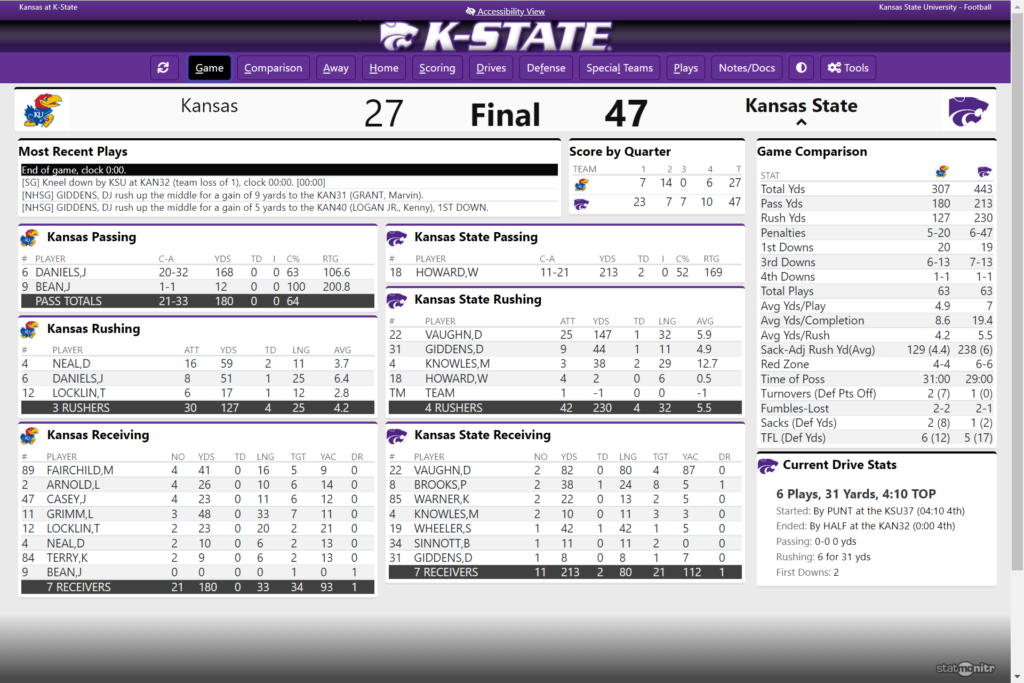