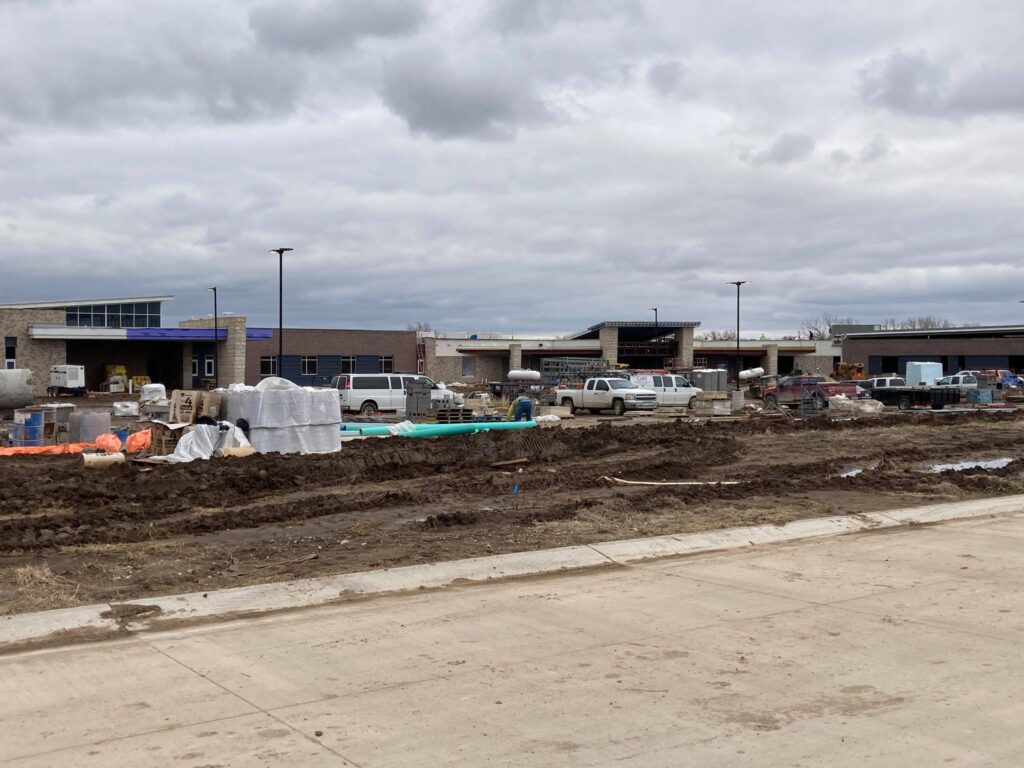 Construction is seen on the site of the new Oliver Brown Elementary School. (Brandon Peoples/KMAN) 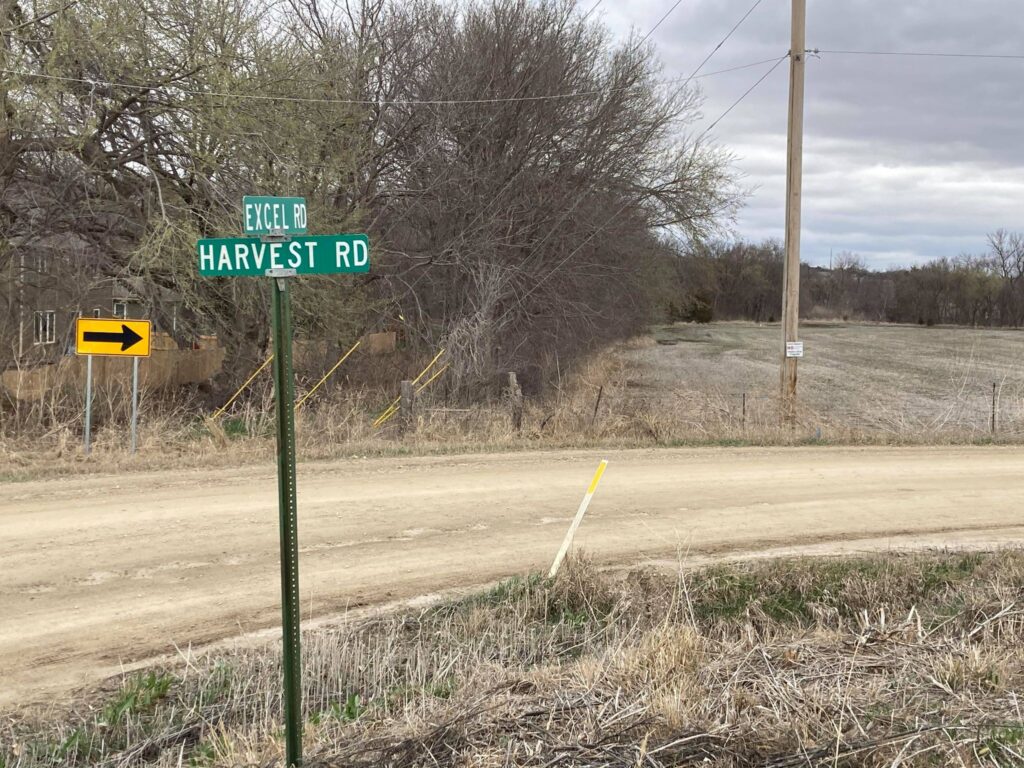 Continued growth in the Green Valley/Blue Township area is making it difficult for Pottawatomie County officials to stay on top of needed improvements to existing road ways.
The area is getting ready to welcome roughly 300 students to Oliver Brown Elementary which opens in the fall. All that added traffic will have to utilize Green Valley Road to access Hwy 24. That is the currently the only single route that directly connects the school to Hwy 24, without having to wind around county roads to the north. There are potential alternatives in the works according to Pottawatomie County Commissioner Pat Weixelman.
“We’ve purchased about 14 acres of right-of-way that goes from Harvest Road up to the new school. I can’t tell you when that road’s going to go in. You’re looking at a multi-million dollar project,” he said.
Weixelman says a proposal would see Excel Road extended north to the school’s east side and connect to Junietta Road from where Excel turns into Harvest Road. The county acquired property last year envisioning an eventual need for an extension. Doing so isn’t cheap and Weixelman says it will require help from the state or other partners to build and eventually maintain.
“We’re planning, we’re trying to stay ahead of the curve. It’s really hard to do sometimes but I guess over a period of time you learn a couple things that might help you in the future. You can shoot yourself in the foot over them too,” he said.
The Blue Township area is now home to some 4,000 residents by most estimates. To put that in perspective, nearby Wamego (the county’s largest community) has a population of around 5,000.
Blue Township is also the sight of some major road construction taking place along the Hwy 24 corridor, the area’s primary route in and out of Manhattan over the Big Blue River. Those projects, according to Weixelman have only reiterated a need for an alternate northern route from Blue Township into Manhattan and Riley County.
The most talked about solution from fellow Commissioner Dee McKee has been the need for a bridge to be constructed over the river that would connect Junietta Road to Marlatt Ave. Critics have argued the need isn’t there based on traffic studies and Pottawatomie County has been met with no formal support from the City of Manhattan or Riley County on any discussions for a bridge, which many estimate would take years to plan and construct and be cost prohibitive to build.
Weixelman says regardless, Pottawatomie County likely could explore a short term solution in paving Junietta to Blue River Road where it curves north and connects to Dyer Road, just south of The Little Grill and just north of the Manhattan city limits.
“That is a route that we’ve looked at maybe trying to upgrade to where it would be a little more hospitable to people driving up and at least have a good emergency route that we could use if something happens,” he said.
In the meantime, motorists will continue to commute through orange cones for the next several months as the county starts work on the Green Valley Road/Hwy 24 intersection improvements. Weixelman says this project has been on the county’s radar for close to eight years.
“Trying to get the right-of-way and easements and everything has been costly and the cost of the project has probably gone up $700,000 to $800,000 for the county itself. We’re sharing in that (cost) with a KDOT grant. We’re basically helping them, it seems like to me,” he said.

KDOT is chipping in about $3 million to help Pottawatomie County improve turn lanes, and a new frontage road. The county is shouldering the other $4.2 million of the project. It won’t be completed until summer 2022.

Grants also came in at about the same time for the work planned along Crown C Circle which extends a frontage road from South Port Road to Crown C and includes improved turn lanes as well.

“A lot of undertaking and a lot of work. It’s going to take a lot of patience,” he said.
The Green Valley Road intersection project will be completed sometime during the summer of 2022. The Crown C project should be finished by sometime this summer.
Share. Twitter Facebook Pinterest LinkedIn Tumblr Email