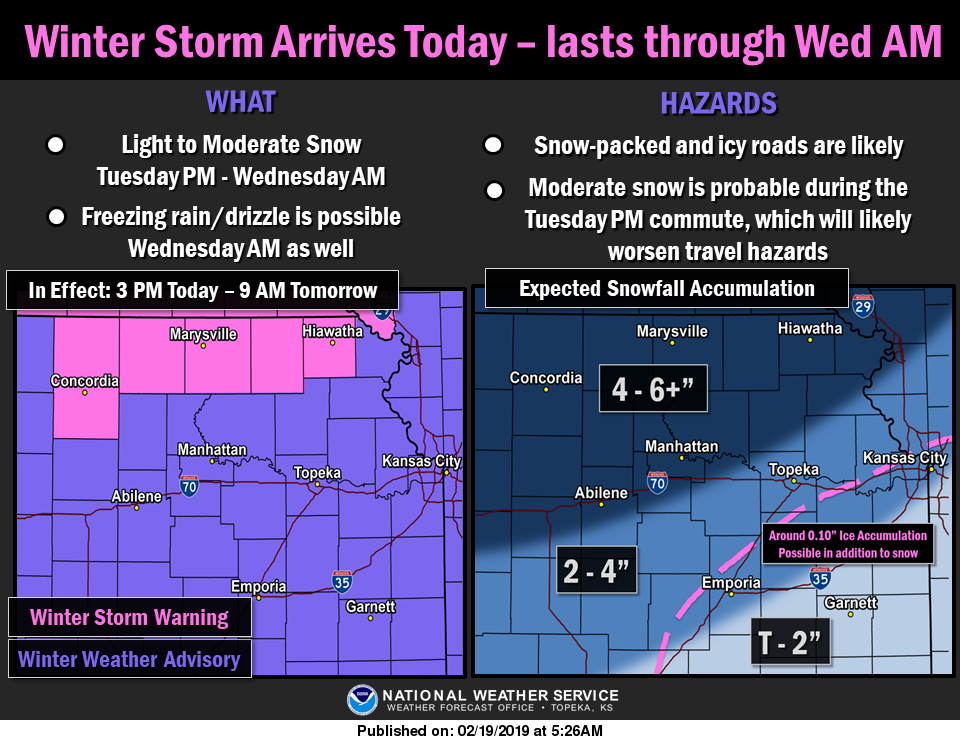 MANHATTAN — Snow returns to the area by late Tuesday afternoon.

A Winter Weather Advisory goes into effect from 3 p.m. today through 9 a.m. Wednesday for Riley, Pottawatomie and most surrounding counties. Further north, a Winter Storm Warning is posted for Marshall and Washington counties.

The forecast is calling for mixed precipitation with total snow accumulations of 3 to 5 inches and up to one-tenth of an inch of ice accumulation. Those totals will be higher to the north. This will cause slippery road conditions and could impact the evening commute tonight and morning commute Wednesday.

According to NWS Meteorologist Kyle Poage Monday, Manhattan has already seen 20.6 inches of accumulating snow this season. Normal snowfall by this time each year is 13 inches.

Manhattan Public Works Street Department Supervisor Jeff Davis said they have already made sure their equipment is ready to go for the storm.  The department will be putting salt down as the storm starts and will be hitting their primary routes as the snow starts to stick.

After they hit the primary routes, they will then focus on their secondary routes and more of the residential neighborhoods.  Davis said this storm will be similar to the previous one so their efforts to clear the roads will be the same.  The amount expected will most likely slow down the efforts of clearing off the roads leading to multiple days of plowing, according to Davis.

Riley County Public Works Director Leon Hobson said they will not be putting salt down before the storm since the plows will throw it off the road.  Instead, they will salt the roads as they are they are plowing.  He said they won’t be doing much in terms of pre-clearing, except for getting their equipment ready.  They will decide later today if they need to have night crews available depending on ho much drops.

The latest road conditions for Kansas can be obtained by calling
5 1 1 or visiting kandrive.org.