You are at:Home»Local News»Gator in Wildcat Creek safely returned to owners 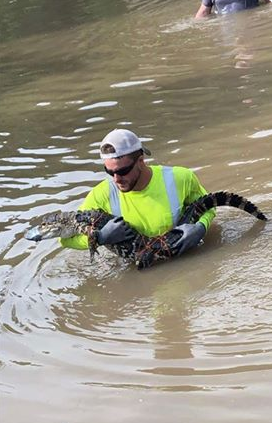 After a month and a half, an alligator stolen from a Manhattan pet store has been safely captured and returned home.

The gator was pulled from the waters of Wildcat Creek by a member of an Ebert Construction crew, currently working on the bridge replacement project on Fort Riley Blvd. The gator was spotted in the area of the bridge and a crew member waded into the water to retrieve it.

The alligator, named Beauregard, is one of two stolen from Reptile World back in June. The owners had first believed the gator in the creek was not theirs, but a third gator. They’ve since confirmed it is their male gator. The female, named Pebbles, died in June after a trap slipped under the water, which the owners believe was tampered with.

It’s still unknown who stole the gators and how they made it into the creek. But photos show Beauregard is back in his tank at Reptile World. The two gators are rescues, and the store has proper licensure to keep the animal.