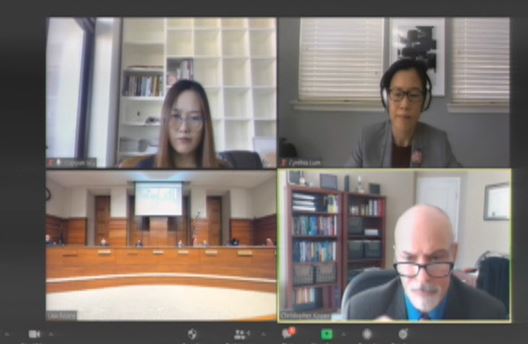 Clockwise from top left: Xiaoyun Wu, Cynthia Lum and Christopher Koper, members of the George Mason University Center for Evidence-Based Crime Policy, Division of Criminology, Law and Society. The researchers presented their findings via Zoom Monday to the Riley County Law Board. (screenshot)

The program is called the RCPD Laser Point Program and focuses in on roughly 10 hot spot street blocks where crime has been known to takes place frequently. It involves 15-20 minute patrols at those locations one to two times per shift and stresses visibility and encourages foot patrol, public contacts and problem solving as well as managerial tracking of activities.

Chris Koper is one of the researchers on the project and says a key thing the program does not emphasize is aggressive action.

“One of the goals at the outset was to reduce an overemphasis on high visibility traffic stops, particularly in place where they aren’t really necessary and where they might generate unnecessary community friction. In fact, as part of the evaluation, we’ve found that the agency’s traffic stops have declined quite considerably over the life of the program,” he said.

Koper says their research took a look at hot spots in Manhattan as well as areas out in the county between 2013 and 2019 as well as the two years prior to implementation in 2011 and 2012.

The program is estimated to have provide about a 14 percent reduction in total calls for crimes and disorder issues. RCPD Director Dennis Butler says it’s a proven sytem of policing that works, and he’s proud of it.

“That ability to be flexible and recognize improvements or changes or new issues and then develop specific strategies for each one is critically important for this overall success. What you’ve just heard about is the philosophy of the Riley County Police Department,” he said.

“Traditionally hot spot policing results in a reduced crime level at the hot spots, not an overall reduction in crime. The significance of your research shows that actually happened here where crime was reduced overall in the entire community,” he said.

George Mason researchers plan to release details of their research with RCPD’s Hot Spot Policing program in a national police journal. It is awaiting final approval to get published. 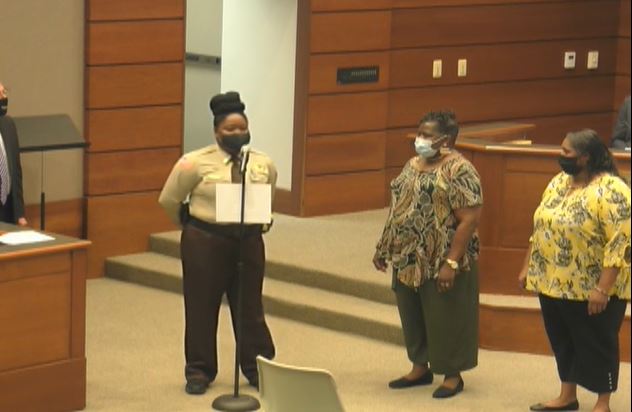 In other business Monday, the Law Board saw the honoring of 10-year Corrections Department employee Michaela Harris, who received her pin as she was promoted from sergeant to lieutenant.

“I endeavor to do a professional job and a good job with my agency and department. I love corrections, I love what I do. There’s pride in the badge and I never want to dishonor that,” she said.

Harris was joined at the ceremony by her mother Olivia Howard Harris and RCPD Corrections Lt. Diahann Frazier. The full Law Board meeting can be viewed below.