BRI visit and overview of its COVID-19 research

While press members were unable to take part in the tour, they were able to speak with Kelly and BRI researchers afterward, including Stephen Higgs, BRI director, and Juergen Richt, Regents Distinguished Professor in the K-State College of Veterinary Medicine.

The last time Kelly visited the BRI was about 12 years ago when the facility was still be constructed.

“It’s really exciting to come back here 12 years later, particularly at this time with the pandemic, and see what has grown here, what has developed here and what incredible contributions are being made here, not only to Kansas and the safety and health of both our animals and our humans, but also worldwide,” Kelly said.

The BRI first began work on COVID-19 studies back in March and has conducted research in the areas of COVID-19 treatment and transmission.

Through their research, BRI researchers have found that SARS-CoV-2, the virus that causes COVID-19, cannot be transmitted by mosquitoes.

“We injected the virus into mosquitoes, three different types, and we were delighted to get negative results that it would not multiply in those mosquitoes, so it could not be transmitted to people,” Higgs said. “We published it and it’s been covered in 42 countries and 550 newspapers and news outlets around the world.”

BRI researchers have also conducted studies using animal subjects, such as cats and hamsters, to test COVID-19 transmission and drugs that could be used to treat the disease.

“We wanted to study the cat, whether it’s susceptible, whether cats can submit it to other cats and, after they overcome their infection, we wanted to know whether we can reinfect them and (if) they are protected against the infections,” Richt said.

One recent study, which was conducted by virologists in the K-State College of Veterinary Medicine in collaboration with researchers at Wichita State, the University of Kansas and the University of Iowa, involved using mice to look at potential therapeutic treatments for human coronavirus infections.

Comments on Medicaid expansion in Kansas

In addition to her comments on research being conducted by the BRI, Kelly took some time to talk about Medicaid expansion in Kansas.

With the primary election in the rear-view mirror and Missouri joining Colorado, Oklahoma and Nebraska as neighboring states that have expanded Medicaid, Kelly says she is looking to the general election in November as a determining factor in how her administration will move forward with the issue.

“We will count noses and votes after that,” Kelly said.

Shortly after Missourians voted for their state to become the 39th state to expand Medicaid Tuesday, Kelly responded by criticizing Republicans in the Kansas legislature for continuing to block expansion.

In her statement, Kelly also said that Medicaid expansion would give an additional 150,000 Kansas residents access to healthcare and add an additional 13,000 jobs to the state’s workforce.

Kelly also addressed the looming college and university reopenings that are scheduled to take place in the coming weeks.

She says success will largely be dependent on everyone, including students, doing their part to follow guidelines.

“We know that bringing people together in one setting is where spread happens,” Kelly said. “There’s no two ways about it, we’ve got bars and restaurants here and this age group is going to want to congregate. We’re going to have to count on them to do their part to make it possible for us to keep the universities open.”

Kelly also expressed appreciation to Kansas college and university leaders for the work they have done to prepare for the upcoming school year.

“It really is not just opening up a business,” Kelly said. “This is opening up an entire community and I think it’s a daunting task, to say the least.”

The first day of fall-semester classes for both Kansas State University and the University of Kansas is scheduled for Aug. 24. 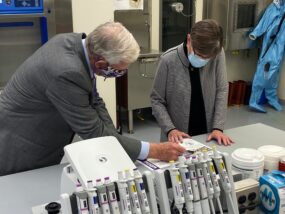