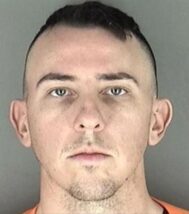 Michael Sears was found guilty on six total charges, including rape, attempted rape and four counts of aggravated indecent liberties with a child. Deputy Riley County Attorney Bethany Fields tells KMAN that all counts face a mandatory sentence of 25 years to life in prison, due to the victims being under the age of 14.

Jurors got the case Friday but recessed for the weekend and finished deliberations Monday morning.

Sears was arrested in Shawnee County in February 2019 and later transferred to Riley County.