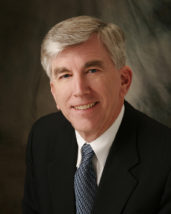 The 2021 campaign kicked off Tuesday for Konza United Way with new campaign chair and former Manhattan Area Chamber of Commerce President Lyle Butler at the helm.

Butler hopes to use his knowledge of the Manhattan business community to foster growth in employee giving campaigns. Speaking on Tuesday’s edition of KMAN’s In Focus, the campaign champion stated he also recognizes the challenges ahead with a community, like so many others, disrupted by a worldwide pandemic.

“I hope that people will be energized to support Konza United Way this year, so we can continue not only to help as we have done in the past, but that we can do it even more. The need is just tremendous,” he said.

Butler also chairs Gov. Laura Kelly’s state recovery task force, set up earlier this year. He encourages anyone to get involved with the campaign.

“You can get involved if you’re an individual, if you’re retired. You can make contributions on your own, you don’t have to be associated with a business. If you’re a business, you can call the United Way office to get ideas to make the campaign, very very exciting,” he said.

Community First National Bank President Rob Stitt is a longtime supporter of the United Way. Through his bank’s employee giving campaign, Stitt encourages employees to not just give to the campaign, but also live it.

“I would say we live united by providing the opportunity for all of employees to participate by either giving them a day off to go work on United Way projects or to volunteer. We allow them to that paid,” he said.

Stitt says doing this opens up opportunities for employees to see firsthand the needs of those who may face challenges.

“We want people to be involved in our community. It opens their eyes, gives them a better appreciation of what it’s like to live in Manhattan, what the challenges are and how lucky they may be. We think that’s very important,” he said.

Butler says the campaign has raised $135,000 so far toward its overall goal.

“That’s about a third of the way there to what we want to do. We’ve got work to do, and all the agencies are under a little extra stress because of COVID-19. They’re challenged, so we want to challenge all of you to live united and contribute to the Konza United Way,” he said.

“The strength depends on each and every one of us. We really appreciate the support we’ve received and hope that even into the coming days, you’ll share how each of us live united,” she said.

Konza United Way invites people to check out their YouTube channel and Facebook for upcoming events, including a virtual day of caring on Sept. 29.

If you missed any of Tuesday’s In Focus featuring Butler, Community First National Bank and CASA, listen here.