Kansas State University Friday unveiled a new plan with the goal of creating thousands of new jobs and bringing billions in investment to the State of Kansas over 10 years.

Dubbed the Economic Prosperity Plan, the announcement at the K-State Alumni Center drew attendance from government and business officials representing both state and local level organizations.

Vice President for Research David Rosowsky says the plan, which has been under development for multiple years, is important for the university and Kansas alike and constitutes an ‘audacious’ commitment to utilize K-State’s research assets to benefit people, communities and businesses throughout the state.

“By remaining laser focused as a university and with the support from the State of Kansas and our private sector partners, we will […] create 3,000 new jobs and bring $3 billion into Kansas over the next 10 years,” Rosowsky says. “We’ve been calling this our ‘3K, 3B plan’.”

The EPP is intended to grow the university’s research enterprises in numerous areas in order to create the forecast high-paying jobs and to attract mature and new business to Kansas that are interested in partnership.

President Richard Myers says the plan comes as a result of inquiries into the capability of Kansas’ colleges and universities to increase the economic prosperity of the state by the Kansas Board of Regents. Myers referred to various research findings that indicates R1 universities, or those institutions conducting the highest levels of scientific research, are uniquely positioned to make an impact.

“It’s going to take lots of hard work to implement, but it has achievable, impactful goals. It’s a plan that this university, the City of Manhattan, and our entire state can be proud of,” says KBOR Chair Dr. Cheryl Harrison-Lee. “We believe K-State is doing more than fulfilling their land grant mission; they are setting the standard as they craft an entirely new land grant vision and model for the 21st century.”

Incoming K-State President Dr. Richard Linton was unable to be present, but sent remarks in video form. Linton says efforts such as the EPP have been central to his career in higher education, noting his experience with North Carolina State’s Centennial Campus.

“It’s a very special part of campus that drives economic promise by bringing academia together with industry — and that connection can be powerful and synergistic,” Linton says. “It creates jobs, it helps the economy, stimulates research innovation, and I think we can do the same kinds of things right here in Kansas.”

Four specific areas of strength at K-State will be the focal points the plan intends to leverage to achieve its goals. Those areas include food and agriculture systems innovation, digital agriculture and advanced analytics, biosecurity and biodefense, as well as extension and community outreach.

“This is not about Ernie [Minton]’s college, the college of Ag., it’s not about Bonnie Rush’s college, Veterinary Medicine; it’s about all the colleges participating in this plan,” says Myers. “There’s room for everybody on this campus and perhaps other campuses we can partner with as we try to move all this forward.” 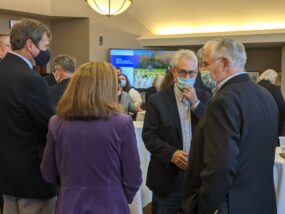 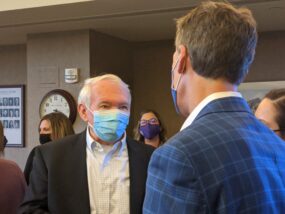 Naturally, a big element of the plan focuses on agriculture and food — fields of work and study that make up over 40 percent of the Kansas economy. Central aims of the EPP include partnering with producers in order to transform and adapt food systems in ways that both benefit farmers and addresses food insecurity.

The plan further aims to position K-State as a leader in the application of new and advanced technologies in agriculture, such as in the use of big data analytics and predictive crop analysis and forecasting and the use of autonomous systems like drones. The university will also work to leverage the locality of the National Bio and Agro Defense Facility to secure a place as a national and global leader in the field.

“We will drive Kansas to a place of global competitiveness in fields that make the most sense for Kansas and for our nation and, of course, the world,” Rosowsky says. 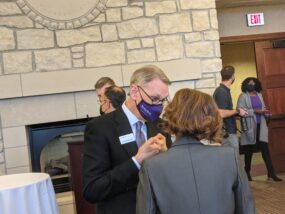 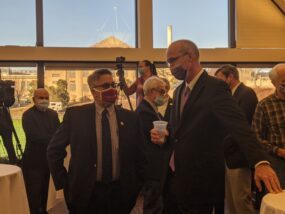 The final area of focus is called K-State 105: Every Town to Gown, the 105 being a reference to the state’s 105 counties. That aspect of the plan will strive to enhance K-State’s presence throughout the state in order to streamline access to university resources. Elements include the creation of an economic development liaison network, assisting companies in accessing technical assistance and research, as well as coordinating entrepreneurial support and training efforts.

“Extension is the model that we use to get out into the counties, it’s a very successful model,” says Rosowsky. “So we’ll certainly rely on our extension service to get us into the 105 counties, but what we see is that the role of Kansas State in each of the 105 counties will be expanded to now specifically look at economic prosperity in and around each of those towns.” 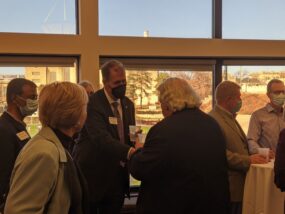 In a written statement, Minton says the plan will lead to competitive economic advantages for Kansas within five to 10 years.

“[E]conomic growth and job creation; profitable, regenerative and sustainable food and agriculture systems; new technologies and innovation; and better health for Kansas citizens through nutritional security,” said Minton, dean of the College of Agriculture and director of K-State Research and Extension.

Rush also provided written comments, adding the EPP makes it easier for companies to partner with the university and will increase efforts to keep College of Veterinary Medicine graduates in Kansas.

“That’s articulating specific metrics and milestones and goals for the first 24 months of this ambitious plan — so think about it as fleshing out the plan,” Rosowsky says. “That should be done by February, end of February of the coming year. At that point, we are truly positioned to activate the assets of the university to engage the faculty and the scholars and the scientists on our campus and to begin driving the plan for Kansas.”