You are at:Home»Local News»Law Board proceeds with cuts to RCPD merits and COLA in ’21 budget 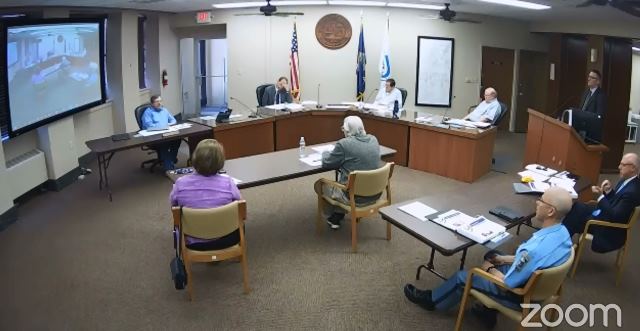 Employees of the Riley County Police Department will not receive a cost of living adjustment or merits next year.

The Riley County Law Board, in a special meeting Friday, voted 5-1 to accept its 2021 budget for publication, which includes a point 65 percent decrease on the overall mill levy, amounting to $143,012 less than initially proposed. That puts the overall budget for 2021 at $21.9 million, just over 1 percent less than the 2020 budget.

The cuts reduce the budget from $22,193,453 in 2020 down to $21,958,728. RCPD had previously presented $470,000 in additional cuts to other aspects of its operating budget in hopes of preserving the COLA and merits for employees. But consensus from the Law Board was that because of anticipated revenue shortfalls and the obligation of both Riley County and the City of Manhattan to fulfill the RCPD budget, the most conservative option had to be selected.

The approved budget proposal cuts close to $313,000 from the department’s health insurance costs and deducts $60,000 from workers compensation.

Law Board member and Manhattan Mayor Pro Tempore Wynn Butler says by statute, the city and county cannot come to the police department mid-year and opt to give them less than what was budgeted for.

“What will happen is they’ll have to fire somebody at the city or county, or maybe they’ll have to shut down the pools down again in 2021, to save the money in operations. Why? Because we have an obligation to meet the RCPD budget,” he said.

Manhattan City Commissioner Linda Morse, who also serves on the board, echoed Butler’s comments, noting it will also be difficult to make those merits and the COLA back up in future budgets.

“I don’t see making up the merit and COLA next year from this year. I think we have to deal with next year as its own entity for budget wise, and because we can’t make any promises for what next year’s budget will look like,” she said.

The one Law Board member to oppose the selected option was city at-large members Robert Ward, a former attorney, who instead favored removing the COLA, but keeping merits in place. He cited 30 years working in the state of Michigan, which is largely dependent on the auto industry, which drives many government entity budgets.

“So I’m not unmindful of what happens to employees and I think in this circumstance because we’re dealing with first responders, and the police department it’s important to show our loyalty to them. So that’s why I’m supporting (option) 4a,” he said.

That option would have sliced $7,400 from the overall tax obligation (about .03 percent), and would have amounted to .45 percent less in the overall budget authority. RCPD officer Brian Johnson, president of the local Fraternal Order of Police testified in favor of keeping the $122,000 in merits and longevity pay for employees as well as the $99,000 in COLA (.63 percent increase from 2020).

“The merits only apply to a third of the department, so any headline that says RCPD got a raise, no they got what the salary schedule told them they would get when they applied and were hired,” he said. “I know the optics but it’s more complicated than that.”

RCPD Director Dennis Butler noted that between 2017 and 2020, non-personnel expenditures were reduced by $470,000 and the approved budgets had gone down almost a half-million dollars. Some aspects of the RCPD budget, including providing courthouse security are mandated by state statute.

Riley County Law Board Chair Marvin Rodriguez, who also serves as the County Commission Chair, says it will take all departments in both the county and city working together to achieve consistency.

“There’s people out there suffering right now that don’t have a chance to have a job, because of the virus. They’re not getting paid at all. I think we’ve got to bite the bullet, pull up our shoestrings, tighten our belt and make some sacrifices,” he said.

Law Board member Barry Wilkerson also voted in favor of the measure. Member Be Stoney was not present at the meeting and thus didn’t vote.

The 2021 budget now heads for publication June 5 in the Manhattan Mercury. The Law Board will hold a public hearing June 18 and will consider formal approval of the budget at that time.