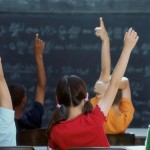 Education was the focus of the 1st Annual Legislative Dinner. About 100 were in attendance at Tuesday’s Start of the Session Legislative Dinner held at the Jayhawk Tower in Topeka. The keynote speaker was former State Board of Education member, Dr. Walt Chappell. He outlined the top priorities of the 2014 Kansas Legislative Agenda.

According to Chappell, number one on the agenda is to define the State’s responsibility for “suitable and adequate” education. Dr. Chappell said the definition of a suitable education is still not defined, but there is a real opportunity in this session.

Other speakers included Kansas Representative John Bradford and former Kansas Representative Darlene Cornfield, who both emphasized the importance of education in Kansas. The 2014 Legislative Session is just beginning, and they encourage the public to get involved. For more information, Dr. Walt Chappell can be contacted at educationalmanagers@cox.net and Kristen George’s website is kansansagainstcommoncore.wordpress.com.