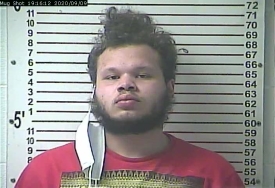 RADCLIFF, Ky. — Junction City Police have announced the arrest of a suspect in a May double homicide.

According to Captain Trish Giordano (Jord-don-oh), 21-year-old Nathaniel Roderick Holmes, also known by the alias “Nook” was taken into custody Wednesday in Radcliff, Kentucky on a Geary County warrant for two counts of first-degree murder. Radcliff is located southwest of Louisville.

Holmes is currently being held in a Kentucky jail awaiting extradition back to Kansas. Bond has been set at $2 million.

Holmes was the second alleged suspect in the double murder of Dylan Spencer and Aaron Villareal (Vill-uh-ray-all) on May 7. The other suspect, Dontavion Wright is currently in custody in Geary County.