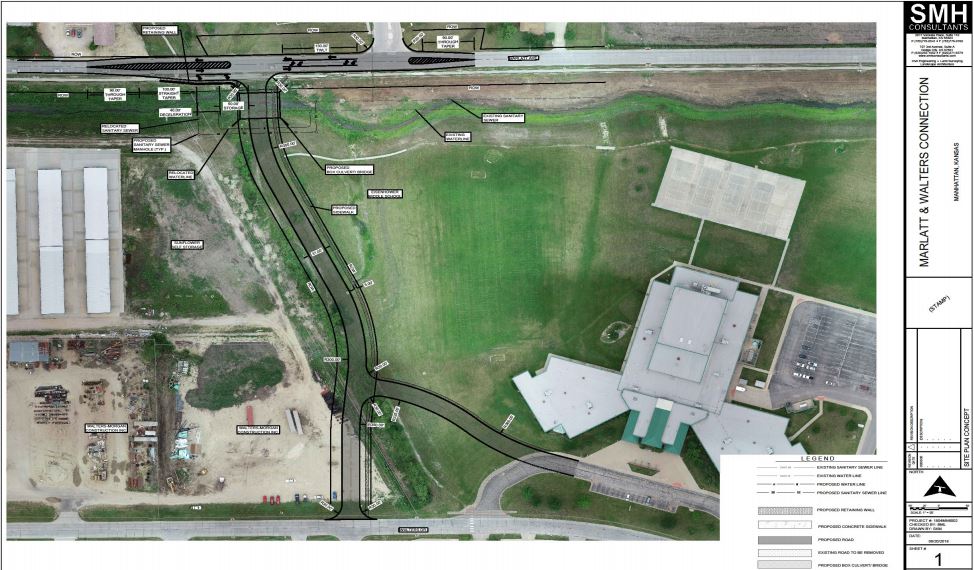 Manhattan plans to extend Kirkwood Drive north, connecting Walters and Marlatt and providing access to the new Eisenhower recreation center. (Courtesy of the City of Manhattan)

A Wamego construction company was chosen to extend Kirkwood Drive north in anticipation of a new recreation center co-located at Eisenhower Middle School.

Manhattan City Commissioners Tuesday unanimously awarded Ebert Construction the nearly $1.6 million contract, though altogether costs for the project including design and easement acquisition are estimated just over $2 million or $2.25 million with contingency funds. Previous estimates put the project at a $1.2 million price tag.

Manhattan is planning to start work on the project in July to extend Kirkwood, connecting Walters Drive and Marlatt Avenue and serving as the primary access to the Eisenhower recreation center as well as an exit route for school drop-offs. In addition to new access, the extension is anticipated to assist with traffic flow and reduce accidents by steering motorists onto Marlatt where they can venture onto Tuttle Creek Boulevard more safely thanks to a traffic light.

Currently, departing traffic funnels into side streets or onto T.C.B. via Walters — which has resulted in numerous high speed accidents including a near miss with a school bus. Twenty accidents have occurred at that location in five years, six of which resulted in serious injury. With the extension, they can install an island to eliminate left turns off of Walters onto T.C.B. as well.

“The traffic is only going to increase with the addition of our gym,” says Morse. “This is something that has long been needed and I’m glad to see a solution.”

Road plans require acquiring a part of the Walters-Morgan property — which the company is preparing to vacate for a new location in the Manhattan Corporate Park. Once their new facility is complete, Walters-Morgan has expressed interest in annexing their 8 acres into the city with the goal of creating a new commercial area. City Commissioners unanimously approved funds up to $75,000 to acquire the easement — the estimated high price for acquiring the land — included in the overall $2 million price tag.

Walters-Morgan’s site is currently in the process of appraisal, estimated to come in between $50,000 and $75,000. (Courtesy of the City of Manhattan)

“We’re very hopeful that that commercial area will develop once it’s annexed into the city,” says City Manager Ron Fehr.
Manhattan Ogden USD 383 donated its easement as part of its partnership with the city for the recreation center project. The project will also improve area storm sewer infrastructure and install a concrete trail connecting Walters and Marlatt.
Manhattan officials have a handful of years to secure permanent funding before debt service is due. Prior projected breakdowns had a $230,000 funding gap when the project was expected to cost closer to $1.2 million. Those plans sourced $695,000 from the stormwater fund for the storm sewer aspect of the project, $71,000 for the trail aspect, and $250,000 from Surface Transportation funding. Additional tax revenue from a potential commercial development and a transportation development district (TDD) were also mentioned as possible sources. 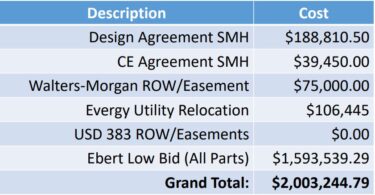 Manhattan is planning for up to $2.26 million in costs including contingency funds. (Courtesy of the City of Manhattan)

Officials estimate a .04 mill property tax impact if a TDD or other offsetting revenue is not sourced, which Fehr says is a last resort.
“The financing is pretty good, it spreads it out across all the funds we can possible tap into,” says Butler. “It’s essential for traffic safety and school bus safety — I mean, that’s a big one. And […] we’ve got to have that road in there because it’s not going to work with our new rec. center if it’s not in place.”
Starting in June, the bulk of work is expected to wrap up before the recreation center is completed in May ’21.
Share. Twitter Facebook Google+ Pinterest LinkedIn Tumblr Email