A public hearing brought commissioners to vote 4-1 to increase the mill levy .350% at the city commission meeting, Tuesday August 1, 2017. After five work sessions to discuss the proposed budget, the commissioners brought the 2018 budget to a vote. The mill levy had been presented by the city of Manhattan’s assistant director of finance, Hillary Badger, and director of finance, Bernie Hayen.  After deliberation between two options, which was to have the mill levy locked in at an increase of .481 or .350, with no more than .5 increase.  The 2017 mill levy was set at .480.

Commissioner Karen McCullough stated she is glad for the .350 increase as it allows more funding to go to ATA bus to help people on the west side of town get to jobs on the other side of Manhattan.

Amendments to the 2017 budget were made as well, and approved 5-0. The amendment was made for General Improvement, to Special Street and Highway and Special Street Maintenance Funds to approve an increased budget due to extra funding. The budget was increased from $2,232,700 to $3,688,780. 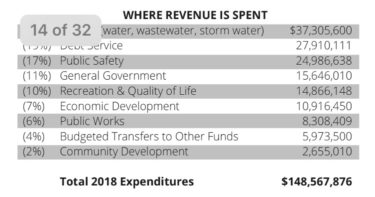 The pictures depict the 2018 Budget summary and revenue incoming and spending.