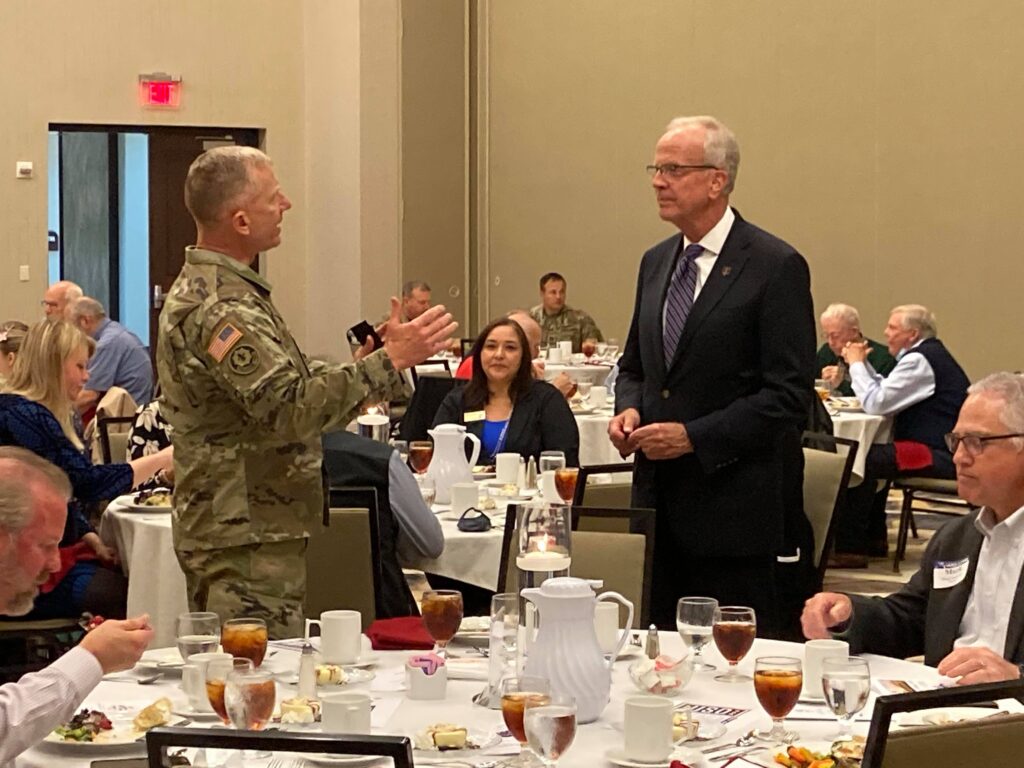 The senior senator from Kansas highlighted defense appropriations, federal legislation tied to military and the importance of continued advocacy for Fort Riley. Moran expressed optimism for Manhattan to receive federal funding through a new grant program his office added to the 2019 defense appropriations bill, through an amendment.

“It was a brand new program. We’re absolutely convinced that with the right kind of adjustments to the grant application, Manhattan’s grant proposal is something that will receive high — I can’t promise approval, but I think we have a grant application that will be well received,” he said.

The program could provide the city with necessary additional federal dollars for a variety of associated costs, such as Manhattan Regional Airport infrastructure improvements.

Last month, Moran’s office announced a $350,000 grant from the U.S. Department of Transportation to help with runway reconstruction. The entire runway project would cost roughly $35 million, with the city likely on the hook for around $3.5 million to $4 million.

Moran also spoke about recent efforts to bring a third brigade to Fort Riley from Fort Carson, which fell short of his intentions.

“The end result was that they were simply changing the mission of the brigade that was already at Fort Carson. They moved no place. As a result, I would never say anything is a consolation prize, we got 50 soldiers (to Fort Riley),” he said.

Moran says he’s delighted those soldiers are here and that he’ll continue to explore ways to bring in additional soldiers to the installation. He says he’s been lobbying the Pentagon, but is unsure of the current administration’s intent.

“I would predict it seems that the Biden administration is reversing course on the Trump administration’s interest in bringing the 2nd Cavalry division back from Germany,” he said.

Moran says in terms of defense spending, an appropriations bill will get through Congress, though he offered no outlook to what the Pentagon budget could look like under the Biden administration. Congressional Democrats are pushing to scale back defense spending. He also expressed frustration at many military leadership positions that remain unfilled, nearly three months in to Biden’s presidency, including a lack of an appointment secretaryship positions for the Army, Navy and Air Force.

“It’s not a problem of being confirmed, those appointments have not yet been made by the administration. From my point of view and working on behalf of this region, particularly on behalf of Fort Riley and Fort Leavenworth, who is the Secretary of the Army is one of the most components of my capability,” he said.

Moran also spoke to new legislation passed to open up expanded access to COVID vaccines for veterans and their caregivers.

“There are veterans who were refusing to be vaccinated unless their spouse or caregiver could be vaccinated, so just in the last few weeks we’ve passed legislation now authorizing the VA to vaccinate not just someone who is a veteran, but also their caregiver or spouse,” he said.

Additional legislation highlighted Wednesday included a bill that improved fairness and equity for pregnant soldiers in terms of leave time. He also spoke to a licensure reciprocity bill for military spouses who seek employment, but may be hindered from state to state due to different local requirements.