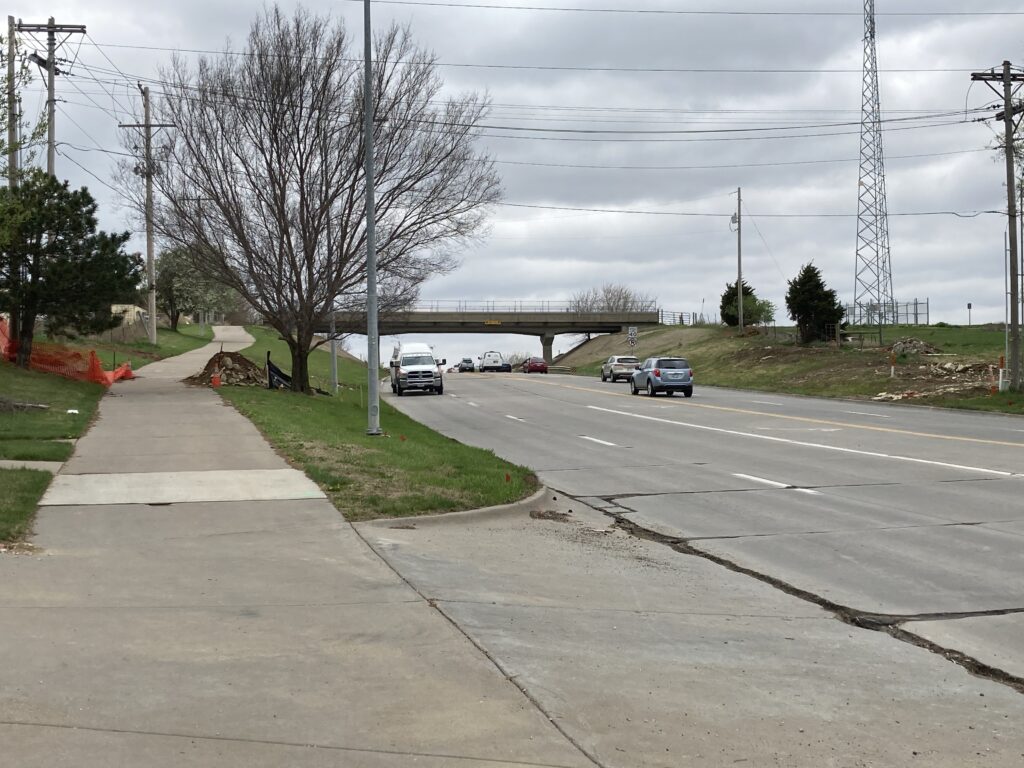 Kimball Ave. looking westbound where the cattle bridge is scheduled for demolition this summer. (Brandon Peoples/KMAN)

Construction along Kimball Ave. is continuing in sections and will include a full closure later this summer between North Manhattan Ave. west to Denison Ave.

Manhattan City Manager Ron Fehr says the removal of the cattle bridge over Kimball will require a one year minimum closure and will see traffic detoured as a result.

“That project is scheduled to be bid in June. We’re probably looking at a late July or early August start date. There’s a lot of work to do there to widen the roadway, rebuild it, wider lanes, turn lanes, a median, all of those things,” he said.

The project will greatly impact traffic from the east, flowing into Bill Snyder Family Stadium for the upcoming football season, which will likely include the return of capacity crowds.

Fehr says a $4.5 million Kansas Department of Transportation grant is assisting with the project which should be completed in time for the 2022 football season.

Elsewhere on Kimball, Fehr says the intersection at College Ave. is nearing completion as landscaping and striping begins to takes place, with likely continued periodic closures of lanes to give contractors more space.

Further to the west, improvements are continuing to storm sewers near Seth Child and Candlewood Drive along with a complete rebuilding of the roadway, similar to what happened in 2019 further east on Kimball near Browning Ave.

Elsewhere across the city, the $8.9 million KDOT bridge replacement on Fort Riley Blvd. over Wildcat Creek is nearing the halfway point. Fehr says contractors plan to make a tie in to the westbound traffic lanes over the next couple weeks

“After that tie in gets done, they’ll plan to move traffic over to those new lanes and then they’ll start working on the rest of the bridge,” he said.

The new bridge will be singular, whereas previously the eastbound and westbound lanes over the creek were separate structures. The new bridge will include turning lanes onto Poliska Lane. Fehr says the project is anticipated for completion toward the end of 2021, weather permitting.

Ebert Construction of Wamego is the contractor for the project.

On the north side of Manhattan, an extension of Kirkwood Drive north to Marlatt Ave. is also nearing completion which includes a new small bridge connecting to the latter. The project coincides with construction of the new Eisenhower Middle School Recreation Center.

“That should be done early summer as we look to tie that in, in conjunction with that rec center opening sometime probably in June or July,” he said.

The new Anthony Middle School rec center will likely open in mid-May, according to Parks & Rec Assistant Director Wyatt Thompson, who was a guest on KMAN’s In Focus Monday.