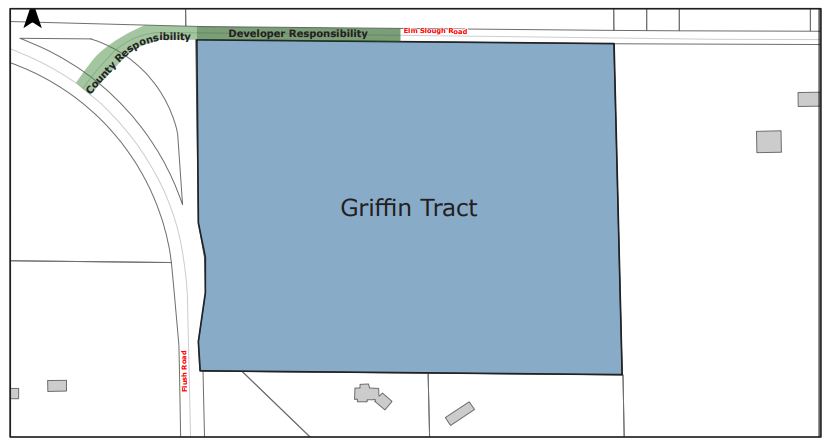 This map shows the paving responsibility for both the county and developer from Flush Road to the proposed entrance to a new residential subdivision. (Image courtesy Pottawatomie County Planning and Zoning.)

Questions remain over how Pottawatomie County will approach a potential cost share agreement for eventual paving on a stretch of Elm Slough Road, east of the Flush Road interchange.

At issue is the prospect of right-of-way acquisitions where a new residential development is being proposed. The developer is required to pay for the 750 feet of existing roadway to the entrance of the new planned subdivision. The width of the 750 foot long piece of roadway, is currently 40 feet, which is less than the 80 feet the county generally requires for major roadways.

The county could require the developer contribute their half of the 80 feet as part of their development. Another option could see the developer donating the remaining right-of-way in exchange for a value reduction of that property. But the county could potentially incur more costs if existing water lines have to be relocated.

Commissioner Dee McKee spoke about how she’d like Planning and Zoning to proceed with plans.

Commissioner Pat Weixelman says there’s no reason the county should be pressured into a quick decision.

County Planner Stephan Metzger was authorized to continue negotiations with landowners and the developer and bring back a recommendation at a later date.

In other business Monday…

Pottawatomie County is seeing some improvement in COVID-19 numbers, according to its top county health official.

While exact numbers weren’t available Monday, Health Department Director Leslie Campbell indicated active cases had dropped by close to a dozen from Wednesday to Friday to around 35 cases, with two hospitalizations. During her report Campbell noted she has hired additional temporary part time staffing and COVID testing is now more readily available in Wamego through a partnership with KDHE.

Commissioners unanimously approved a 30-day extension to the county’s emergency declaration at the request of the health department and emergency management.

A number of openings remain in Pottawatomie County, but officials may be closer to hiring a new public works administrator.

Human Resources Director Whitney Phebus gave commissioners a brief update Monday on where the county is at in the interview process with potential candidates.

That position has been vacant since last December. Phebus says there are additional positions that have come open in recent weeks in both the Sheriff’s Office and the county clerk’s office as well as in emergency management.