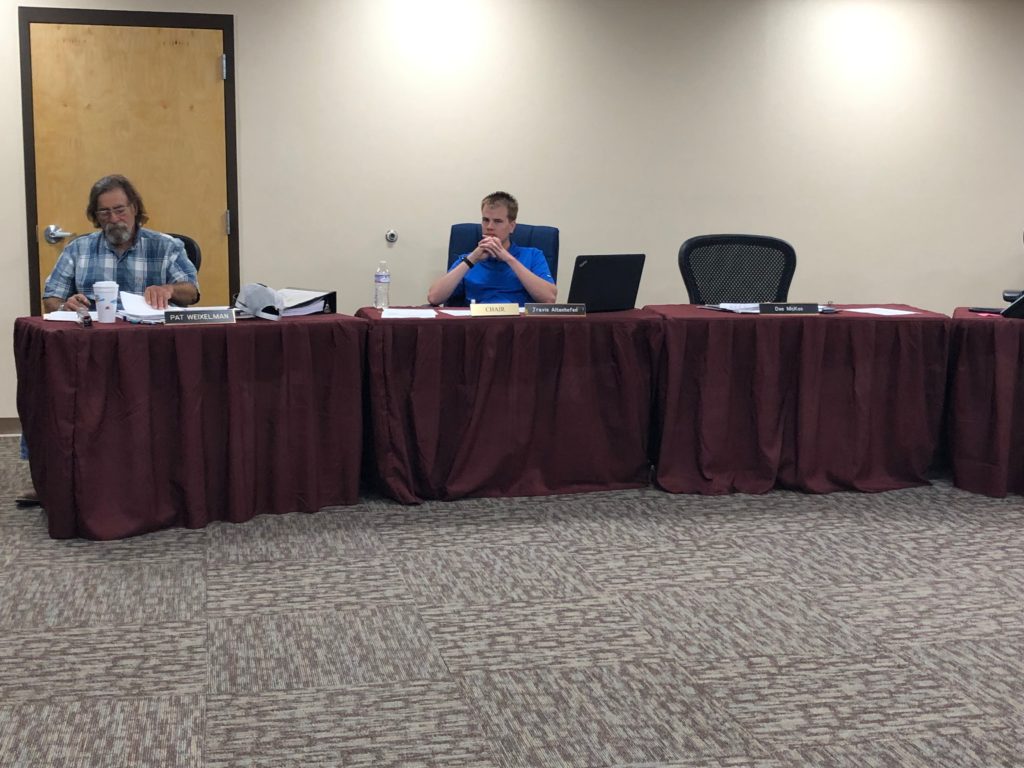 WESTMORELAND, Kan. — The Pottawatomie County Commission continues to field requests for the 2020 budget. On Monday commissioners heard a proposal from Pottawatomie County Sheriff Greg Riat.
The Sheriff’s Office is requesting a $21,600 increase in capital outlay funds. Commission Chair Travis Altenhofen says additionally, that includes a slight increase in funding for the Pottawatomie County Jail.
“We’ve had some increase on housing of inmates as well as food costs. That’s because he (Sheriff Riat) has been taking for pay some inmates when the opportunity presents itself. Otherwise the department budget has been relatively flat,” Altenhofen said.
The overall increase is $32,600 which would bring the total 2020 budget for the Sheriff’s Office to $3.078 million. Contract services would see a $9,000 increase while commodities would increase by $2,000. Altenhofen says the commission thanked Sheriff Riat for his work to maintain the level of service while staying within their budget parameters.
In other business, Zoning Administrator Gregg Webster presented commissioners a plat review for Brockman subdivision which includes lots in the Oak Canyon subdivision in rural Pottawatomie County. The area was originally platted in 1961. Webster says many of the individual lots are not suited for building by themselves.
“If somebody wants to build a house on a lot, generally they have to have more than one lot. We will ask they re-plat those into one lot, so that takes away the possibility of selling those lots individually,” Webster said.
A house is currently being built in the subdivision, where six individual lots are being combined into one 3.76 acre lot.
Coming up on Tuesday, residents on opposite ends of Pottawatomie County will have opportunities to engage more with their respective communities. In the Blue Township area, in southwestern Pottawatomie County, the public is invited to a two-hour open house at Flint Hills Christian School where information will be available on the Green Valley Area Plan.
“You can come and go and they have a presentation that will loop. A number of boards will be positioned around the room with different informational topics,” Webster said.
That event takes place from 6 to 8 p.m.
A joint meeting for the Pottawatomie County Comprehensive Plan is also planned for 7 p.m. July 25 in the Sunflower Room in Westmoreland.
Meanwhile Tuesday in the northeastern part of the county, voters in the small community of Havensville head to the polls to decide whether or not to build a new city hall. County Clerk Nancy McCarter tells KMAN the community has over 70 registered voters.
Share. Twitter Facebook Google+ Pinterest LinkedIn Tumblr Email