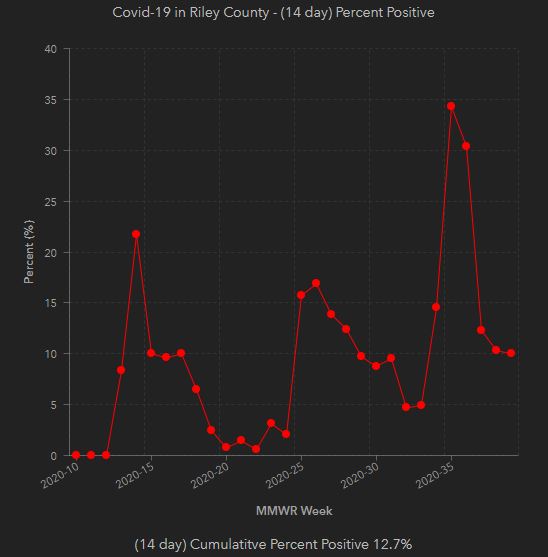 For the first time in six weeks, the percent of individuals testing positive for the coronavirus in Riley County has fallen below 10 percent.
The health department says for the week of Sept. 20, that rate fell to 9.6 percent, with 108 total cases. It was the fourth consecutive week that the rate decreased after reaching a peak of 34.3 percent in late August. Health Department Director Julie Gibbs.
“We are happy to see that number back down from 30 percent back down to 10 percent. It’s come down significantly,” she said.
Gibbs also says K-12 schools aren’t seeing many new cases.
“Luckily, we’re not really seeing a whole lot in our K-12 schools. I know that was a worry when we went back to school,” she said.
Gibbs says less people aged 18 to 24 have tested positive in recent weeks, but says more older adults are testing positive.
“So it’s starting to spread out a little bit and I remember on one of our Facebook Live programs about a month ago, (Ascension Via Christi President) Bob Copple predicted that we’d see a wave of college students testing positive and that it would spread out,” she said.
The Kansas Department of Health and Environment is still backlogged, with information going as far back as May. Some of the new cases being reported locally aren’t recent, as a result, and include positive recovered cases.
“Some of the new positives we report don’t represent recent tests, but rather they are positive recovered cases,” said RCHD Emergency Preparedness Coordinator Renee Lucas. “When uploading cases that are positive but already recovered, we go back and add to the data for percentages based on the test date. This is why our percentages change, sometimes even weeks later.”
The health department recently began having medical providers sent results directly to the health department which Gibbs says has improved contact tracing efforts.
Share. Twitter Facebook Google+ Pinterest LinkedIn Tumblr Email