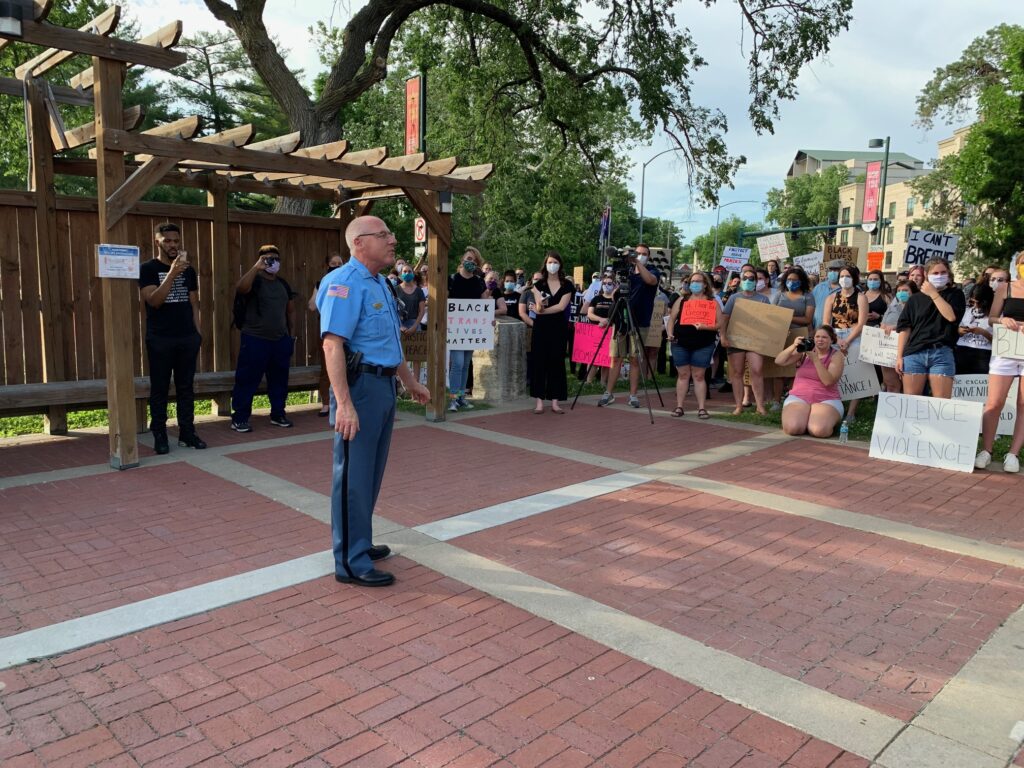 Dennis Butler, the RCPD director, speaks to protesters prior to marching on Bluemont Ave.. (Photo by Derek Simmons/KMAN)

Around 2,000 protesters Tuesday marched from Aggieville’s Triangle Park down Bluemont Avenue in opposition to racism as well as biased policing and advocating for justice for George Floyd, killed last week by Minneapolis police.

Dennis Butler joins the show. RCPD director. He spoke yesterday at the protest and rally before everybody went walking down Bluemont. Dennis, appreciate the time and joining me here. Just, in your eyes, how did you feel like things did go? It seemed rather peaceful, uh, for the most part.

I thought the event went very well. Uh, I’ve never actually addressed a crowd at a rally like that before. I’ve done a lot of public speaking, but never with that many people without a microphone. So, it was a new experience for me. I was very pleased that the organizers asked me to come and address the crowd. The difficulty for me in a situation like this is trying to find the right words that would convey to people concerned about what they were there to protest that we have a police department here that they should not be afraid of and that they should believe is legitimate and trustworthy.

And I say it that way because they don’t really, most of them don’t know me. A lot of them don’t know our officers personally, and it’s easy to say things to try to reassure them. Normally, I prepare remarks for something like that, but my attempts to do that really, I felt, in my own mind, were not going well because it just felt canned and prepared. And I didn’t want to come across that way because I wanted my comments to them to reassure them about our department to be heartfelt. So that was my attempt.

At the end of the rally, I understand, there was only one arrest and it wasn’t anybody affiliated with the rally. It was a man who had very different views, extremist views, about minorities. And he was shouting racist threats at some of the peaceful protesters and our officers heard what he said and they determined he committed a crime and arrested him, which is what should have happened. And I’m just glad that there was no other violence or other people there with different intentions than what the rally was scheduled for.

I’m talking right now with Dennis Butler, from the Riley County police department, the director of the department. You know, bigger picture here, when you see what happened with George Floyd and his murder and what has happened since then with all the protests, how much does that force you as the director of a police department to look in and say, Hey, are there, are there some things we need to change about what we’re doing?

That’s a really good question and you and I could have this conversation for several hours. And it’s hard for people who are unfamiliar with policing to understand what I’m going to talk about here, but it’s significant. We are an accredited police department. Anybody who is in healthcare or education understands the significance of being accredited. Uh, they know it requires constant self-assessment, constant auditing and inspection, and it often is done by people that don’t work in your agency. They come in from the outside to verify that you’re meeting best practices.

The Riley County Police Department’s been accredited since 1991 continuously. It’s only one of 10 departments in this state of 400 law enforcement agencies that is accredited. And what that means is that we have voluntarily agreed to embrace the best practices in policing that are constantly changing and established by an outside organization. And we have 25 percent of all of our policies and standards reviewed every year. And then on the fourth year, we have an on-site inspection.

So what that means is we have very, very clear policies on use of force, pursuit policies, handling evidence, and we have to prove that we’re following those. We review them ourselves, all uses of force are reviewed through about six layers of supervision before I get it. I personally review every one, every pursuit.

So when you talk about looking back in light of everything that’s going on, I feel very confident that the policies that we have in place apply to everyone equally in terms of use of force or other matters. And when we find that there has been a mistake or someone who needs retraining, because they don’t fully understand how we should be doing things, we correct it. And we correct it at a, at a much higher rate than at citizen complaints that we receive. And that’s our goal. Our goal is we find problems before it affects service to the public.

So, I don’t want to sound at all like we can’t get better, we can always get better. But to say that based on what we’ve seen in the most recent events or the ones from last year or five years before that, I feel very confident that we’re doing things the right way here. In fact, I’ve worked in three police departments. This is my third department. Each one was accredited and only about 5% of the departments in the country are accredited and it’s not mandatory. And that’s why, it’s voluntary. There’s no departments in Minnesota that are accredited. You can look at the Columbia website, the commission on accreditation for law enforcement agencies has a list of all of their, their customers. And there’s no departments in Minnesota that are accredited.

I’m talking with Dennis Butler who’s the Riley County Police Department director. Was it, in your eyes, 2000 [in attendance]? Does that sound about right? And was that kind of what you guys were expecting yesterday?

Yeah, to be honest with you, I was surprised to hear that number because I was in an area where the speakers were and there was a little bit of a rise, you know, in the park there. And I saw people gathered and I, in my eyes, I thought there was maybe 500 people there. So, uh, but don’t go by my assessment because I didn’t really walk in through the crowd. I talked to people who came up to me and ones that I talked to. So I was surprised by that number, but very pleased, even more pleased than it went well with that large of a group.

Are you guys anticipating more of this continuing in the coming days here in Manhattan?

My understanding is there’s another gathering planned this evening (Wednesday) at City Park. It’s a different group. It’s not this group. I haven’t personally confirmed who it is. I’ve been told who it might be, but I don’t want to say it without knowing for sure. I was not invited to that gathering, but we will have officers in the area to again […] ensure that they can have a safe conversation or rally or whatever they want to have. And so, uh, that’s my understanding. There’s also something that’s been loosely organized for next Saturday, but, uh, they had come to us and asked for our help and making sure it can happen, but it was, uh, it needs a little bit more organization and permission from some property owners. So we’re waiting to hear back to make sure they’ve got that nailed down before we get involved with it.

You know, I’m more than happy to have conversations about how we run our department anytime, and to talk in more detail about what I just brought up. It’s comprehensive, it’s complicated, but it is worth the conversation. If people are willing to listen.