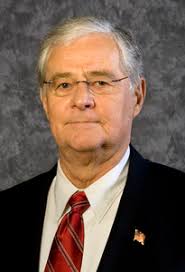 A state lawmaker from Wamego is being recognized Monday as a new inductee into the U.S. Army Officer Candidate School Hall of Fame.

A ceremony for 51st District Rep. Ron Highland will take place at 9 a.m. in the old Supreme Court Room at the Statehouse. He’ll also be recognized at 10 a.m. on the floor of the House of Representatives. Retired Lt. General and 67th District Rep. Mike Dodson, of Manhattan, will conduct the ceremony on the House floor.

Highland was stationed as a platoon leader in Korea at the time of the capture of the Pueblo Naval Ship. During that conflict, it became clear to him that his troops might be the expendable force. Highland was wounded and some gave their lives in the crossfire. While the Pueblo ship was never returned, he helped write the plan for the release of all those aboard the ship.

Highland was nominated last May by members of his OCS class, most of whom served in Vietnam.