On the phone, examining maps and orchestrating the emergency response efforts within Riley County is Tyler Seifkes, a Riley County Police Department dispatcher. 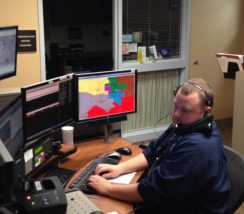 ed for the RCPD over the past decade, following his time in the radio industry and graduating with a degree in communications from Kansas State University. Dispatchers at the RCPD headquarters are the only employees of the county’s law enforcement who work 12 hour shifts. After the end of a long day, dispatchers clock out and cope with what they had dealt with over their shift. For a long-time employee like Seifkes, it’s become easier over the years to handle the stress of the job.

“Get comfortable and also separate your emotions from it. That’s a big part of it,” says Seifkes, “there are some calls that really challenge you mentally. Anything that involves children is especially difficult. Yes we’re not there, we don’t see what’s going on, but we’re not only taking a call from somebody in possibly the worst moment of their lives, but we also send the guys we work with into that situation.”

Seifkes says the job can definitely have it’s bad days, and he doubted his job for the first year working with the RCPD. After settling into it, however, Seifkes learned to become proficient at assisting the public in their times of need and getting patrol officers at the right place before it’s too late.

“We dispatch for the police department, the fire departments, both the Manhattan and Riley County rural fire, and Riley County EMS.” said Seifkes,  “We’re the primary answering point for all 911 emergency calls. So if you’re interested in multitasking, never having the same thing each day, I mean, it’s always different.”

After all the emotionally taxing events Seifkes handles in the office, he says dispatchers often handle calls that make them feel accomplished.

“You can have extremes,” Seifkes explains, “we’ve had dispatchers deliver babies on the side of the road, that’s definitely going to be a rewarding experience for somebody… There’s little things everyday, in our interactions with citizens, or other members of the department or emergency services where you handle a call very well, somebody gets the help they need, and you try not to let that become a routine feeling.”

KMAN asked Seifkes what his thoughts were on public interaction, and if he could remind the community about anything, what it would be.

“I think one of the biggest misconceptions is that if you call 911 and you’re talking to a (dispatcher),” said Seifkes, “and they ask you all these questions and you feel like there’s a delay, because they should be also dispatching officers. There’s a separation in what (callers think) dispatchers are doing. (Dispatchers) are taking the call, they’re trying to get your information so that their partners can dispatch units to the scene. That’s the biggest thing I want people in the community to know.”

Seifkes says fraternal organizations at the RCPD and public outreach programs play a big part in what he described as a critical aspect of what they do. He told KMAN that if anyone is interested in learning about what dispatchers in Riley County do, and would like to arrange a tour through department, simply give the RCPD a call.

Seifkes looked back on his starting days with the RCPD, and passed on advice for members of the community who may consider a job as a dispatcher.

“I would like people to look at this as not just a job, but as a career.” Seifkes said, “I don’t know if I really considered that when I applied for the job. It is definitely a career, it has become my career, and I won’t do anything else if they’ll have me.”

Tyler Seifkes’s story is the third and final part of the Riley County Justice mini-series. Hear from Seifkes by clicking here: