Riley County swore in its elected officials on Monday. 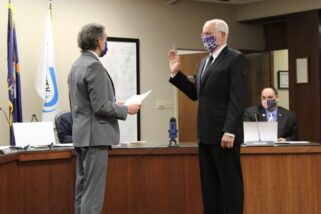 Commissioner Greg McKinley being sworn in by Judge Grant Bannister

Among the new officials are two new county commissioners and a new Register of Deeds.  Commissioners Greg McKinley and Kathryn Focke officially took their seats for their first commission meeting.  They are succeeding Ron Wells and Marvin Rodriguez, representing the District 2 and 3 seats.

Register of Deeds Amy Manges was also sworn in, succeeding Debbie Regester.  Regester had been serving in the position for 20 years before deciding not to run again in 2020.  Manges had been an employee in the Deeds office prior to running for the position. 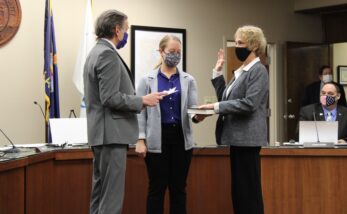 Commissioner Kathryn Focke being sworn in for the first time

Along with the newly elected officials, returning officials County Clerk Rich Vargo, County Attorney Barry Wilkerson, and Treasurer Shilo Heger were all sworn back in to their positions.  21st District Judge Kendra Lewison was sworn in for her first elected full term as district judge.  She took over for Judge Meryl Wilson back in 2019.  Judge Grant Bannister presided over the swearing in ceremony.

During public comment, Rodriguez congratulated the new commissioners and wished them luck.

“I think both of you will be very good for the county and listening to you, you are both people of high integrity, so I feel it is in good hands,” says Rodriguez.

Ford congratulated Focke and McKinley during his commission comments.  He says he is very optimistic about where the commission is at currently.

“Hope you guys are ready to roll up your sleeves and get ready to solve some of the challenges that we face as Riley County moving forward,” says Ford.

Ford also congratulated the other officials sworn in Monday morning.   Focke and McKinley both made comments as well, saying they have met with department heads and are ready to get started.