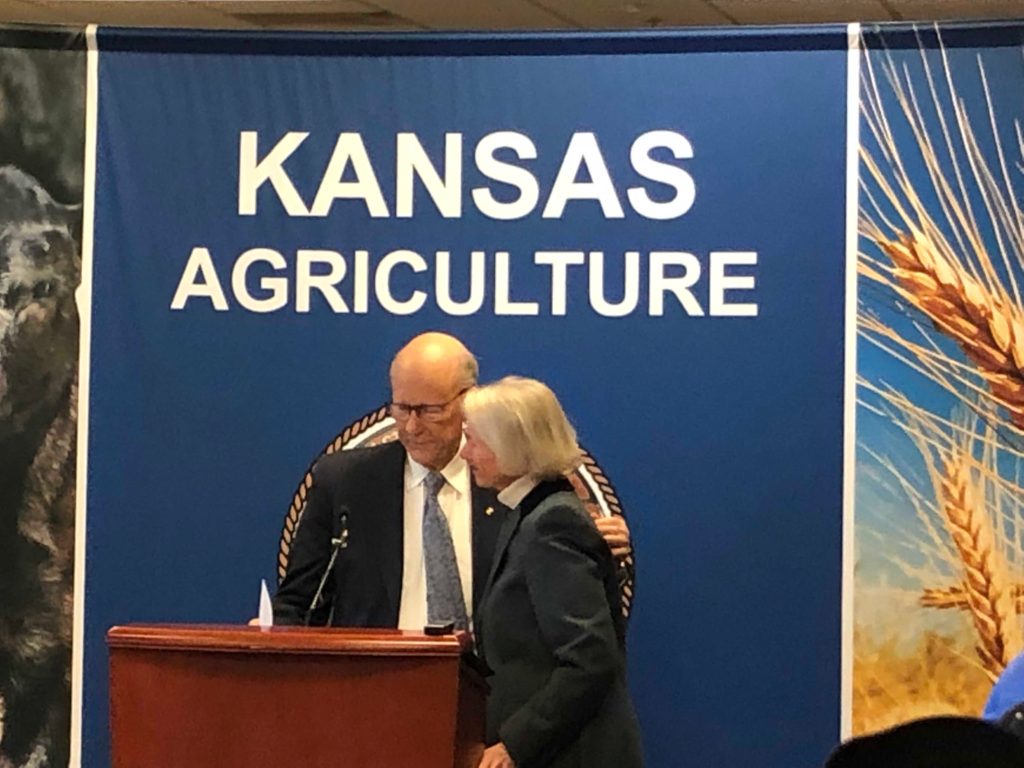 Sen. Pat Roberts and wife Franki embraced during a Friday morning press conference in Manhattan where the long-time Senator announced his plan to retire in 2020. Photo by Brandon Peoples/News Radio KMAN

MANHATTAN — Senator Pat Roberts (R-Kan.) announced plans for his future during a news conference Friday morning at the Kansas Department of Agriculture headquarters in Manhattan.
Roberts future
The 82-year-old Republican chairs the Senate Agriculture Committee and has been known by some of his colleagues of reaching across the aisle to get things done. Roberts credited the bipartisan work to pass a farm bill last month, noting a “thread of comity in the Senate.”
Roberts comity
When he leaves office in 2020, Roberts will hold the title of Kansas’ longest serving member of Congress. Roberts called the passing of the farm bill one of his top political achievements, especially with 87 members voting in favor of it. While he says it will be hard to top, he’s certainly going to try.
Roberts work to do
As for who fills Roberts’ seat, that remains to be seen. A number of candidates are already being floated as potential GOP candidates in 2020 including Rep. Roger Marshall, former Rep. Kevin Yoder, Attorney General Derek Schmidt, Kansas Chamber of Commerce President Alan Cobb and Kansas Secretary of State Kris Kobach. Outgoing Gov. Jeff Colyer also said in December he wouldn’t rule out a future run for public office at some point. On the Democratic side, U.S. Attorney for Kansas Barry Grissom could become a front runner. McClatchy DC reports that Grissom has been weighing a 2020 campaign for months.
Roberts’ colleague, Senator Jerry Moran (R-Kan.) thanked Roberts for his service in a release. Moran wrote that Roberts’ leadership and ability to bring individuals on both sides of the aisle together will be missed in Congress.

Pat has had an impressive tenure as a leader in both the House and the Senate. @SenPatRoberts‘ leadership, wit and ability to bring individuals on both sides of the aisle together, skills he honed in service to our nation as a U.S. Marine, will be missed in Congress. pic.twitter.com/11gignM1RD

There is no way to describe Senator Roberts other than a Statesman whose achievements for Kansas are amongst the greatest. He’s been a resilient voice advocating on behalf of Kansans for decades and we will greatly miss his leadership here in Washington. (1/2)

Laina and I wish both the Senator and Franki all the best and look forward to continuing to seek out their guidance and council. (2/2)