You are at:Home»Local News»Topeka man arrested after leading police pursuit west of Manhattan 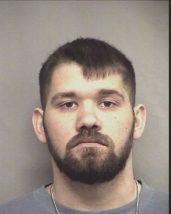 MANHATTAN — A Topeka man was arrested Monday after leading Riley County Police on a brief pursuit onto Kansas Hwy 18, west of Manhattan.

Dylan Wayne Masse, 28, faces four total counts including a charge of flee or attempt to elude, reckless driving, possession of stolen property and operating a car without a required device. According to scanner traffic Monday, the vehicle Massey was in was reported as stolen. The chase was short lived, with officers apprehending Massey around 5:30 p.m. on K-18 just past Scenic Drive.

This is not Massey’s first run in with the law. On May 27, Massey was arrested by the Jackson County Sheriff’s Office after the department said he fell asleep in a pickup stolen out of Wabaunsee County, near Eskridge. He also has prior convictions dating back to 2017 and 2014, according to the Kansas Department of Corrections.

Massey remains jailed in Riley County on a $9,000 bond.