You are at:Home»Local News»Two arrested after discharge of weapon, alleged assault 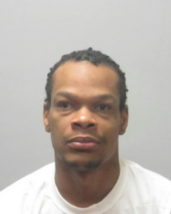 MANHATTAN — A pair of Manhattan residents were arrested over the weekend on charges stemming from an alleged assault that involved the unlawful discharge of a firearm.

Riley County Police listed two Manhattan women as the victims after a known female suspect discharged a weapon and a known male suspect displayed a weapon around 2:30 a.m. Saturday. An investigation led to the arrest of 25-year-old Danielle Stein in the 400 block of Ehlers Road. She’s charged with aggravated assault and unlawful discharge of a firearm inside city limits. She was issued a $5,000 bond but was no longer confined at the time of Monday’s report.

Also arrested at the same address was 31-year-old Sylvester Calvert Jr. He’s charged with two counts of aggravated assault and use of a deadly weapon, one count of attempted aggravated intimidation of a witness or victim and one count of criminal possession of a weapon by a felon. He remains jailed on a $20,000 bond.

According to the Kansas Department of Corrections, Calvert has prior drug convictions in both Riley and Pottawatomie counties.