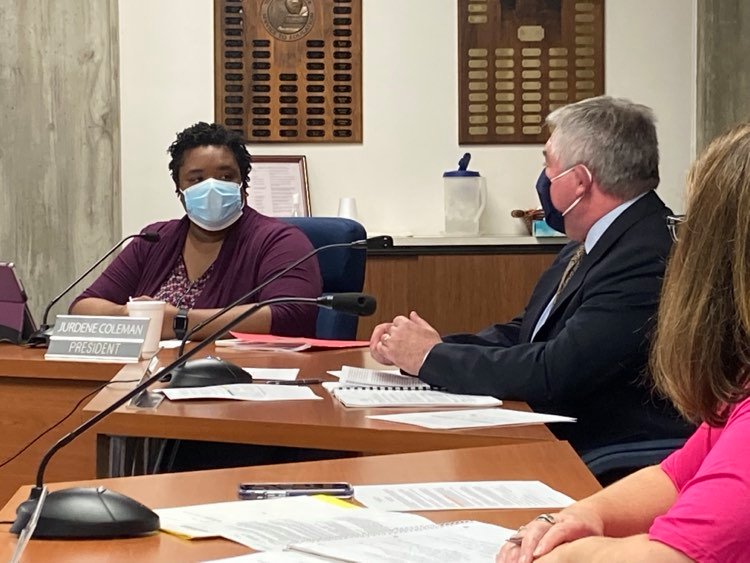 Masks will remain a requirement inside all Manhattan-Ogden school facilities for at least the next five weeks.

School board members approved Wednesday the latest pandemic response plan update in a 5-2 vote, extending universal masking on campuses through Oct. 22. Board member Brandy Santos has opposed masks from the start and did so again Wednesday.

Board member Darell Edie previously supported universal masking but voted against it this time saying he believes it may not be as effective as most health experts say it is at mitigating the spread.

Part of the updated plan includes the newly updated data dashboard, which shows the Riley County percent positive rate, vaccinations, attendance rates, positive tests among students and staff and quarantines. It initially included a red, yellow and green level to guide mask requirements in schools. The board chose to drop the yellow level altogether at the recommendation of board president Jurdene Coleman.

Coleman supported the plan as did board vice president Kristin Brighton.

Santos says Brighton’s word proved her point that despite being in a “we’re in this together” mindset, the responsibility shouldn’t fall on individuals to protect one another but rather to do what’s best for themselves.

Board member Curt Herrman agreed with Santos’ objection to setting future precedence on masking, for other illnesses, such as the flu. However he says he feels confident with the medical advisory team’s guidance on the issue above all else.

The board will revisit the plan at its Oct. 20 meeting.

In other business Wednesday, the board unanimously approved an extended contract for Superintendent Dr. Marvin Wade through June 30, 2023 with a 3.7 percent raise retroactive to July 1, 2021. According to Board Clerk Diane Denison, Wade’s base salary for the 2021-2022 school year is $218,448.85.