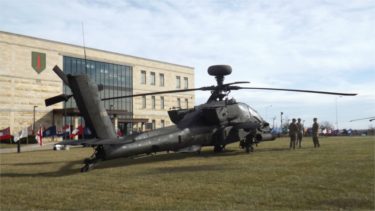 This is an Apache helicopter that was on display at Fort Riley. People will be able to see what it is like to fly one of these in a virtual-reality simulator at the Flint Hills Discovery Center this Veterans Day. (KMAN Photo)

This year, people will also have a chance to observe some of the tools today’s soldiers use in combat.

Beginning Sunday evening, there will be one particularly large piece of equipment on display at City Park.

“We also have some static displays in front of City Park to include an M1A2 Abrams tank,” Janet Nichols, the president of the Flint Hills Veterans Coalition, said. “It’s getting dropped off on Sunday evening, so it should be there while it’s still light out on Sunday and then it’ll be there til around two o’clock. We’re trying to get the tank moved before school gets out.”

There will also be an opportunity to see what it is like to pilot a vehicle some may consider a flying tank.

In the parking lot of the Flint Hills Discovery Center, there will be a virtual-reality trailer in which people can simulate what it is like to pilot an Apache helicopter

“You put on the big goggles and you’re sitting in a special seat and you fly around in an Apache helicopter,” Nichols said. “They’ll be there, I think, from 11 a.m. to 4 p.m..”

Other Veterans Day festivities include:

To listen to members of the FHVC talk about events going on throughout the day, visit https://1350kman.com/in-focus-11-8-19/.