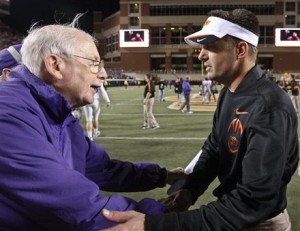 MANHATTAN, Kan. – Kansas State head coach Bill Snyder was named the 2011 Associated Press Big 12 Coach of the Year today after leading the Wildcats to a 10-2 record in the regular season and a No. 8 ranking in the final regular season BCS standings.

Snyder, currently the 11th-winningest active coach among FBS schools, was selected on 16 of the 17 ballots turned in by media members who regularly cover the league. The Wildcats, which headed into the 2011 season with nine first-year starters, were picked to finish eighth in the Big 12 preseason race and have won a nation-leading eight games this season by seven points or less and 10 games in a season for the first time since 2003.

“I am extremely proud of our coaches and the young men in our program for working and preparing each day to get better,” said Snyder. “The success we have had to this point in the season has been a direct result of that, and I appreciate very much their willingness to work and achieve the goals that we set out each day to accomplish.”

A two-time national coach of the year selection and three-time Big 12 coach of the year pick, Snyder’s 159 victories are more than triple the man in second place on K-State’s all-time coaching victories list, while the legendary head coach has led the program to 13 bowl games, which included 11 straight from 1993-2003 and back-to-back appearances in 2010 and 2011.

No. 8 Kansas State faces No. 6 Arkansas in the 2012 AT&T Cotton Bowl on January 6 as the two teams will square off in Cowboys Stadium in Arlington, Texas.