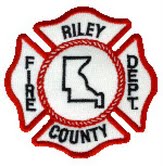 As KMAN previously reported a call came in around 10:15 Friday night from Mike Kalmer, who resides in the 7800 block of Powy’s Lane, about eight miles west of Riley,  saying that his home was on fire.

Fire fighters from Riley arrived first to find flames coming out of the roof of the residence.  They, along with help from five other stations, worked to put out the blaze until about 5 am.

At about 6 am, a call came that the fire had rekindled at the location and more firefighters were brought on scene to take care of the areas that were still too hot to leave.

Those involved were on the site until about noon.

A total of about 42 firefighters were on scene throughout the 14 hour period and about 70 to 80 thousand gallons of water had to be transported in from Riley.

The family was able to escape their home and no significant injuries were reported.

According to Fire Chief Pat Collins, “the cause of the fire is still unknown and will probably remain that way due to the significant damage.”

Over 20 firefighters fought an apparatus fire until the early hours of this morning.

Riley County Firefighters received a call around 10:15 p.m. Friday, from Mike Kalmer.  Kalmer resides on the 7800 block of Powy’s, about nine miles west of Riley.

Fire fighters from Riley arrived first to find flames coming out of the roof of the residence.  Nine apparatus from five stations, and 26 firefighters fought the blaze until 5 o’clock this morning.

KMAN will continue to bring you updates on this fire, as they become available.