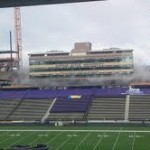 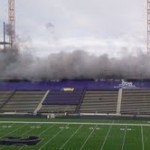 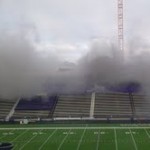 The ground shook as the explosion began that would bring the Dev Nelson Press Box to the ground.

On Saturday, December 15, the 20 year life of the press box came to an end.

As construction efforts for the new facility are moving forward, the current box needed to come down quickly.  Therefore, the implosion was scheduled.

As a precaution, during the time College and Kimball saw road closures, but the event captivated spectators both inside the club house across from the press box and those on the street.

Though only taking a few seconds to bring it down, getting to that point took a lot of coordinating to make sure people were safe.

John Currie, athletic director at Kansas State, spoke before the countdown began talking about the history of the building and how the new facility will be ready for next year’s football season.

Throughout the clubhouse across from the press box, a viewing party was set up allowing avid football fans to come and watch as a piece of their history came to an end.

Dan Bird, a semi-retired Manhattan resident, spoke with tears in his eyes of his memories of driving three hours for 51 years to get to Manhattan for games and in 1992 was given seats in the press box.

Though the old have fallen, the new facility will be able to accommodate the growing need that the athletic department is seeing.

Over the next eight months, progress will continue to be made as the deadline for completion draws near.