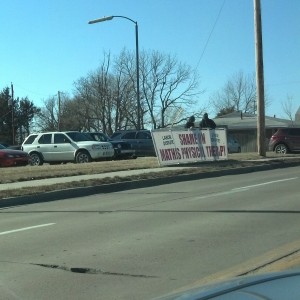 “Shame on Mathis Physical Therapy” reads the banner that has been put up outside the therapy center on College Avenue.  A local carpenter’s union is protesting for the reason that non-union laborers were hired during the construction of the new office.

The union protesting the center is the local carpenter’s union #918.  They not only posted the banner, but are also handing out flyers with Mathis’s name and a picture of a rat.  The flyers also give a phone number to call.  Mathis said he has tried calling and explaining to them “they have the wrong guy”.

KMAN has attempted to contact Manhattan Medical Center, but the individual needing to be reached is not currently available. We will continue to bring you news updates as they become available.