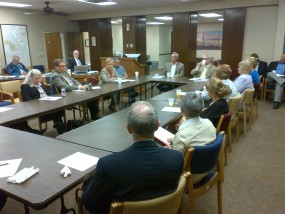 “This is a good day to talk about this” said Representative of the 66th District, Sydney Carlin jokingly, as it pounded down rain Thursday morning while three legislators and Riley County Commissioners discussed flood management.

County Commissioner, Dave Lewis spoke largely on the subject, as he lives in an area where flood insurance has become a large concern.  He mentioned some of his neighbors could be paying around $4,000-$5,000 every year in flood insurance.

This legislative delegation breakfast was held prior to the county commission meeting that day.  Besides Representative Carlin, Representative of the 67th District, Tom Phillips and Senator, Tom Hawk attended the discussion.  Several county department heads were also in attendance.

Several other topics were brought up, including medicare, the autism bill, mental and public health funding, bio-science funds, and the debt ratio.