“I’ve been here since 1994, and this is the lowest it’s ever been”.  This was a statement made by Riley County Health Department Women, Infants and Children (WIC) Coordinator, during Monday’s county commission meeting.

Although this is not good news, Ross did mention that a majority of the state is in the same position.  As far as reasons why case loads are down, Ross said the low birth rate could be a contributing factor.  She added that other states have dropped their WIC programs, which could mean people here aren’t aware that the programs still exist in Kansas.

During her presentation, Ross added that other programs in the area seem to be experiencing similar issues.  The Manhattan/Ogden USD 383 summer feeding program was recently suspended, in one location, after just a few days, for “low enrollment”.

Noxious Weed Director, Dennis Peterson had the privilege of presenting a scholarship during the meeting, as he is this year’s County Official of the Year.  The Kansas Association of Counties (KAC) scholarship was awarded to Emma Glessner in the amount of $1,000.

Executive Director of KAC, Randall Allen was also in attendance for the presentation. 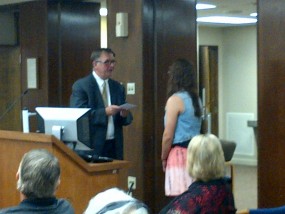 Glessner graduated from Riley County High School and plans to attend the University of Kansas this fall to major in speech pathology.