Former Manhattan mayor Bruce Snead spoke to those attending the joint Manhattan city commission and parks and recreation advisory board during the strategic facilities improvement plan update on Tuesday night in city hall, and he was upbeat about the progress by the committee and researchers.

Snead said the process was important, and “the character of parks and recreation facilities are just a very important dimension of the quality of life in the community.”

Concerns were raised during the briefing on funding measures, but city officials were quick to point out the construction of the document is in its initial stages of creation.

Commissioner Karen McCulloh said the funding issue might not be as onerous as many believe, and finding a balance to meet the needs of the community is possible.

Community member David Dzewaltowski had concerns that the questions in the survey might not be the right ones to fit the needs of the community.  He pointed out the shortfall of questions about visiting teams, and whether or not the demographic data would be able to weed out the transitional population of students and soldiers.  However, commissioner Usha Reddi and Mayor Wynn Butler said they thought it was very clear that the plan was to serve the community.  Mayor Butler said this plan was not a part of an economic development project.

Research contractor Ron Vine of the ETC Institute said he could “guarantee” that his survey would produce usable results.  Vine says approximately 3,000 surveys would be distributed to a sample to achieve the desired responses for valid statistical data.  Commissioner Richard Jankovich admonished the media to make sure potential recipients knew the importance of the surveys to the future of the community.

According to the researchers hired by the city the initial survey should be ready to be disseminated to the participants sometime in January, and the report will be generated and complete by May.

More information on the current status, and content of the strategic facilities improvement plan update, can be found at http://cityofmhk.com/index.aspx?nid=2214. 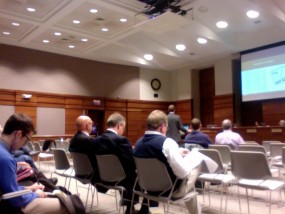